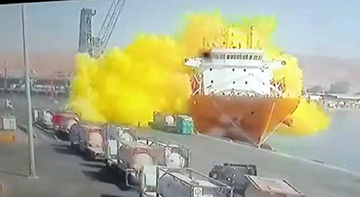 AMMAN: At least 12 people died and more than 250 were injured on Monday when a tank of toxic chlorine gas plunged from a crane and exploded at Aqaba port in Jordan.
Eight of the casualties were Jordanian, with the other four coming from other nations.
The force of the blast sent a truck rolling down the harborside, while clouds of yellow gas billowed overhead and dock workers ran for their lives.
Nearby areas were evacuated and residents told to close and seal doors and windows and to avoid going out.
Public Security Department spokesman Amer Sartawy said “specialists and the hazardous substances team in the civil defense” were dealing with the incident.
Prime Minister Bishr Khasawneh and Interior Minister Mazen Al-Faraya immediately headed to the scene, visited a hospital where some of the injured were being treated, and formed an investigation team into the incident.
The accident happened when a tank filled with 25 tons of chlorine gas being exported to Djibouti fell while being transported. Video footage showed showed a crane hoisting the tank from a truck, and then the tank falling on to the deck of a ship and exploding.
The injured were transported to two state hospitals, one private facility and a field hospital.
Aqaba health director Jamal Obeidat said hospitals in the area were full and could not receive more cases. “The injured people are in medium to critical condition,” he said.
Aqaba port is the Jordan’s only marine terminal and a key transit point for much of its imports and exports. Its beaches are also a major tourist attraction, and were evacuated after Monday’s incident.
Dr. Mhammed Al-Tarawneh, a chest diseases consultant, said chlorine gas was extremely toxic, and the leakcould significantly affect areas surrounding the explosion.
He said contact with this gas could cause irritation of the mucous membranes and a red skin rash. Inhaling the gas could cause pneumonia, burning in the esophagus, diarrhea, headaches, vision impairment, and loss of consciousness.
Saudi Arabia extended its condolences to the families of the victims, the Saudi Press Agency said early Tuesday, citing a foreign ministry statement.
The Kingdom wished the injured a speedy recovery and hoped for Jordan security, peace and stability.
The US offered its condolences to the families of the victims of the blast. “We stand ready to support the government of Jordan as it responds to this tragedy,” US Ambassador Henry Wooster said. “I urge all US citizens in Aqaba to follow all public health guidance.”
The secretary-general of the GCC, Dr. Nayef Falah Mubarak Al-Hajraf, also expressed his condolences. “The GCC stands with the government and the Jordanian people in these difficult moments,” he said.