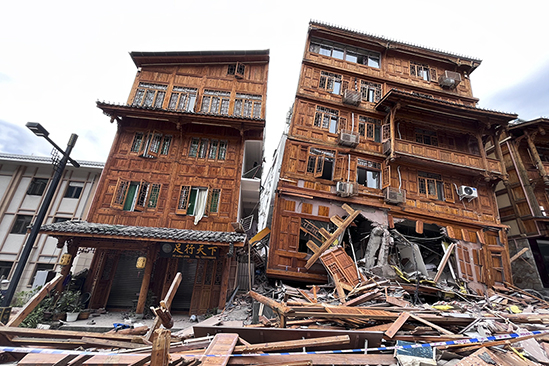 The 6.8-magnitude earthquake that jolted Luding county in Southwest China’s Sichuan Province, the largest earthquake in Sichuan since 2017, claimed at least 66 lives and injured 253 people as of Tuesday, and while China is making all-out efforts to save lives and minimize casualties, many countries sent their profound condolences and sympathies over the disaster.

With the use of home-made drones and satellites to restore communications and provide remote sensing and meteorological services, China’s earthquake response has improved immensely since the fatal Wenchuan earthquake in 2008. However, Chinese seismologists warned that the epicenter and nearby regions in Sichuan have to prepare for possible secondary disasters after the quake such as mudslides and landslides in the following days and even years.

As of 2 pm Tuesday, 66 people are dead due to the tremor, including 38 from Garze Tibetan Autonomous Prefecture which administers Luding county, and 28 in Ya’an city. Fifteen people are missing and 253 people are injured, according to Sichuan provincial emergency management department.

According to the China Earthquake Administration, the Luding earthquake is the largest seismic event in Sichuan since the Jiuzhaigou 7.0-magnitude earthquake in 2017.

By Tuesday evening, Sichuan had recorded 10 aftershocks, nine between 3.0 to 3.9 magnitude, and 15 village roads and 16,000 households are cut off.

Meanwhile, water from a dammed lake formed after the quake along the Wandong River has been discharged and all the quake-affected residents have been relocated.

Liu Hong, head of the bureau of culture, radio, television and tourism in Garze, who was at the frontline, )in Hailuogou at the epicenter, told the Global Times via text on Tuesday that the road in and out of Hailuogou had collapsed in the quake and communication had also been cut off.

More than 200 people are trapped in the national glacier forest park located in Hailuogou, reported China Central Television on Tuesday.

Liu said the stranded tourists are currently fine, and there is no impact on the glacier in the park. The extent of any damage to the tourism infrastructure is being assessed.

A Sichuan-based geologist who requested anonymity told the Global Times on Tuesday that unlike the Wenchuan earthquake which occurred in the section of Longmenshan fault zone, Luding is located in Xianshuihe fault zone, and both fault zones have been active in history.

The Xianshuihe fault zone experiences an earthquake of magnitude 6 or higher every few decades, the expert said.

As for whether the Luding earthquake is related to the Wenchuan earthquake, Gao Jianguo, an expert from China Association for Disaster Prevention, told the Global Times on Tuesday that the two were not connected since they occurred along different fault zones.

The above-quoted anonymous expert said more aftershocks are likely to occur in the following days although the magnitude will not be high, but the aftershocks may last days to years.

More importantly, as the earthquake took place where the Qinghai-Xizang Plateau and Sichuan Basin meet, an area full of high mountains, steep slopes, deep valleys and canyons, the earthquake is likely to cause mudslides and landslides, the expert said, warning that the risk of these secondary disasters may last for years as the quake has loosened rock formations.

According to Sichuan meteorological department, Luding is likely to see heavy rain in the next three days, and local authorities should enhance their precautions over landslides.

Luding earthquake has touched Chinese people’s hearts, and companies and ordinary residents have begun to donate emergency supplies. Rescue forces from different places have arrived at the epicenter and communication providers have rushed to restore communications.

On Weibo, earthquake-related topics topped the most-viewed lists on Tuesday. A video about a SWAT team establishing a rope bridge over the fast flowing turbulent river in the earthquake-stricken region on Monday and climbing the rope to the other side with their bare hands to rescue villagers has been circulated widely on Weibo, as it reminded many of a crucial event during the Long March (1934-36) in which Red Army soldiers clung to the iron chains of the Luding Bridge, whose planks had been removed, amid intense machine-gun fire from Kuomintang troops on the other side and finally seized the Kuomintang-controlled bridge.

Some netizens commented that Chinese soldiers and police can always overcome difficulties no matter if it was more than 80 years ago or it is in the future.

But fortunately, with the rapid development of technology, Chinese rescue forces do not need to risk their lives in these dangerous missions.

The China National Space Administration has activated the civil and commercial satellite emergency response mechanism and tasked more than 10 satellites to take emergency images of the quake-hit areas.

A Twin-Tailed Scorpion drone was dispatched to assist in inspections and communication coverage on Monday and Tuesday, according to a note its developer Sichuan Tengdun Tech Co sent to the Global Times on Tuesday.

The drone on Tuesday flew over a dammed lake in Luding county which was formed after the quake and was able to restore communications for local villagers.

The Global Times also learned that a Wing Loong 2 drone arrived in the region on Monday. The drone can carry out disaster survey and emergency communications relay missions, according to its developer, the state-owned Aviation Industry Corp of China.

Seeing how drones and satellites made China’s natural disaster response much easier and faster, many netizens hailed China’s development in earthquake response mechanisms, especially since the 2008 Wenchuan earthquake.

“Many still remember vividly that we had to rely on 15 heroes risking their lives to make a parachute jump from 5,000-meters high to the epicenter in order to restore communication [at that time], but 14 years later, we can send these home-made machines to do the same job,” a netizen posted on Weibo.

Not just in rescue technology, but China has beefed up earthquake prevention efforts on education, exercises and infrastructure, Gao said.

Since the Wenchuan earthquake, many villages constructed high-quality roads for rescue vehicles to pass, and upgraded earthquake resistant structures and highways, Gao said.

The Chengdu-based Institute of Care-Life, a disaster-reduction lab, established an earthquake warning network in 2010 that now covers 90 percent of China’s densely populated earthquake-prone areas, and the network was able to give an early warning alert to some areas, the lab told the Global Times.

The network issued a warning in the fifth second of Luding quake, giving 20 seconds of warning for nearby Ya’an city and 50 seconds for Chengdu, capital of Sichuan Province.

As iron brothers, Pakistan has expressed its condolences. Pakistan Prime Minister Shehbaz Sharif tweeted on Monday that he was deeply saddened by the loss of precious lives. “We offer our profound condolences and most sincere sympathies to the bereaved families and stand by the government and people of China in this tragedy,” he said.

In an exclusive interview with the Global Times on Tuesday, Pakistani Ambassador to China Moin ul Haque said, “Our sincere condolences and thoughts are with the bereaved families and we pray for the early recovery of the injured.”

“As iron brothers and close friends, people of Pakistan feel and share the pain of our Chinese brothers and sisters and stand in solidarity with them in this hour of national tragedy,” the ambassador said.

Several foreign embassies from countries including the US, New Zealand and South Korea posted on their Sina Weibo accounts of their deep condolences.

The US Embassy in China posted on Weibo on Tuesday that Ambassador to China Nicholas Burns said “our deepest condolences to the families of those killed in the Sichuan earthquake. We wish a full recovery for those injured.”

UN Resident Coordinator in China Siddharth Chatterjee tweeted on Tuesday that he is deeply saddened by the tragic loss of lives and destruction caused by Monday’s earthquake in Sichuan Province. “We stand ready to assist and support the Government of China’s valiant rescue efforts,” he said.