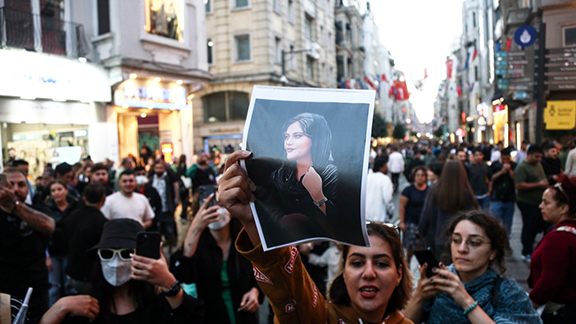 Paris, Sept 22 (AFP/APP): Iran has been rocked by a week of protests over the death last week of a young woman, who was arrested by the feared morality police for allegedly wearing the Islamic headscarf in an “improper” way.
Some women demonstrators have defiantly taken off their hijabs and thrown them on bonfires or symbolically cut their hair before cheering crowds.
The protests are the biggest in the Islamic Republic since the November 2019 unrest over fuel price rises, and are marked this time by the presence of large numbers of women.
Mahsa Amini, a 22-year-old Kurdish woman, is on a visit to Tehran with her family on September 13 when she is detained by the special police unit that enforces Iran’s strict dress rules for women, including the compulsory headscarf.
Her brother Kiaresh tells the Iran Wire news website that while he was waiting outside the police station for her to be released an ambulance drove past taking her to hospital.
He was told that she had had a heart attack and a brain seizure and was now in a coma.
Tehran police say she “suddenly suffered a heart problem” and release CCTV footage appearing to show her collapsing in the police station.
She is declared dead on September 16 by state television after having spent three days in a coma.
Activists say she suffered a fatal blow to the head, a claim denied by officials.
President Ebrahim Raisi orders an inquiry.
Shortly after her death is announced, a crowd gathers outside the Kasra hospital in central Tehran.
In her hometown of Saghez, where her body is laid to rest on September 17, some residents hurl stones at the governor’s office and chant anti-regime slogans, according to Iran’s Fars news agency.
The head of Tehran’s medical examiner’s office tells state television that investigations into the cause of death will take up to three weeks to complete.
Security forces on September 18 arrest several people among a crowd of about 500 demonstrators in Sanandaj in Kurdistan province, Fars news agency reports.
Protesters “smashed the windows of some parked cars, set fire to bins”, and “police used tear gas to disperse the crowd”, the agency says.
On Twitter, the hashtag #Masha_Amini had clocked up close to 1.5 million tweets at midday on Sunday, including numerous videos of women cutting their hair in protest.
“The hair of our girls is covered with a shroud,” several footballers on Iran’s national team wrote in a joint story they shared on Instagram.
“If these are Muslims, may God make me an infidel,” charged Sardar Azmoun, who plays for the German club Bayer Leverkusen.
On Monday, September 19, protests break out at several universities in Iran’s capital.
A brief video released by Fars shows a crowd of several dozen people, including women who have removed their headscarves, shouting “Death to the Islamic republic!”
On Tuesday, the governor of Kurdistan province says three people have been killed during the protests there.
Videos posted on social media show women removing their veils and chanting “Woman, life, freedom” and “Death to the dictator”, a slogan directed at Ayatollah Ali Khamenei, Iran’s supreme leader.
They also show some protesters defacing or burning images of Khamenei and late Revolutionary Guards commander Qasem Soleimani.
As the discontent grows, a representative of Khamenei’s pays a visit to Amini’s family.
In a rare stand an Iranian lawmaker, Jalal Rashidi Koochi, criticises the morality police or “Guidance Patrol”, saying “it has had no result except loss and damage for the country”.
On Wednesday, state media reports that, in a fifth night of rallies, police used tear gas to disperse crowds of up to 1,000 people who hurled stones at security forces, set fire to police vehicles and chanted anti-government slogans in cities including Mashhad, Tabriz, Isfahan and Shiraz.
In an address to the UN General Assembly, US President Joe Biden says “we stand with the brave citizens and the brave women of Iran who right now are demonstrating to secure their basic rights”.
After nearly a week of protests Thursday, Iran blocks access to Instagram and WhatsApp, the two apps most widely used in Iran, and imposes drastic restrictions on internet access.
The death toll had risen to at least 17, including four security personnel, according to state television but the Oslo-based Iran Human Rights NGO said it had counted at least 31 civilians deaths.