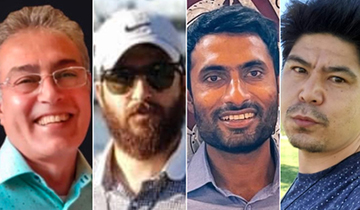 WASHINGTON, Aug 10 (APP): Police in Albuquerque, a city in the southern US state of New Mexico, Tuesday announced the arrest of an Afghan Muslim as the “primary suspect” in the killings of four Muslims, three of them from Pakistan, that raised fears in the community and led to increased security at mosques and schools, according to media reports.

Muhammad Syed, 51, also a resident of Albuquerque, was charged in two of the killings and was called a suspect by police in the two other slayings

The four shot dead last week, are: Naeem Hussain, Muhammad Afzaal Hussain and Aftab Hussain from Pakistan, while the fourth — Mohammad Ahmadi — was an Afghan.
The ambush-style killings drew a strong condemnation from President Joe Biden.

Ahmad Assed, the president of the Islamic Center of New Mexico, a mosque that at least three of the victims had attended, said the authorities were looking at the possibility of sectarian killing to which the Afghan was apparently motivated.

Police officials said they were not yet sure but had found evidence that an “interpersonal conflict” may have led to the shootings.

The chief of the Albuquerque Police Department, Harold Medina, said that it was not yet appropriate to label the killings as either hate crimes or serial murders.

Syed had immigrated from Afghanistan and lived in Albuquerque for five or six years, according to the reports. He had faced several domestic violence charges in recent years that were later dismissed. Syed’s sons were questioned after his arrest and later released, the reports added.

Several hundred people attended a vigil for the victims at the mosque on Tuesday evening. Muslim leaders, as well as Roman Catholic, Jewish, Sikh and Mennonite residents spoke about the losses absorbed by Albuquerque’s Muslim community.

“The last two weeks have been nothing but nightmares,” Tahir Gauba, a director of the mosque, said. Referring to the arrest of the suspect, he added, “Tonight the Muslim community will sleep in peace.’

New Mexico Governor Michelle Lujan Grisham, a Democrat, said the arrest shows “law enforcement and all partners at their best,” while she thanked the public for providing tips.

Grisham said state authorities would bring justice for the community.

“We are working on the justice side of that equation, which is absolutely critical,” the governor said at the press conference. “We will bring justice, the full force of the law, and accountability will be made.”

Last week police offered a $20,000 reward for information that led to the arrest of the suspect or suspects connected to the slayings.

Albuquerque Police Department Deputy Commander Kyle Hartsock was quoted as saying that “hundreds” of tips came in from residents, leading police to the local residence of Syed, the suspect.

Hartsock said officers watched Syed file into the car they were searching for — a Volkswagen Jetta — before they stopped the vehicle.

Hartsock said a search warrant executed on Syed’s home found multiple firearms, with one firearm found inside the home and another discovered inside the car. Both are linked to the shootings of the three Hussains, he said.

Local and state police have teamed up with federal agents from the FBI and the Bureau of Alcohol, Tobacco, Firearms and Explosives for the investigation.

The Council for American-Islamic Relations (CAIR), a Washington-based advocacy group, said in a press release that the suspect may have been targeting Shia Muslims.

CAIR National Executive Director Nihad Awad said he was “disturbed” by the indications of a potential hate crime.

He said, “We welcome the arrest of a suspect in this horrific shooting spree and we commend law enforcement for their efforts at the local, state and federal levels. We hope the news that this violence has been brought to an end will provide the New Mexico Muslim community some sense of relief and security.

“Although we are waiting to learn more about these crimes, we are disturbed by early indications that the alleged killer may have been targeting particular members of the Shia community. If this is true, it is completely unacceptable, and we encourage law enforcement to file any appropriate hate crime charges against the suspect.”

“Acts of hateful, sectarian violence against followers of the Shia tradition and any other group have no place in our communities, our country or anywhere else. American Muslims are and must be united against all forms of hateful bigotry, including anti-Shia bias.”

Albuquerque Mayor Tim Keller, a Democrat, on Tuesday said local authorities plan to work more closely with community members in the future, saying this was a reminder of how important forging close ties and bonds are.

“We always have said we would be there for each other when we needed it,” Keller said. “Fortunately, we have demonstrated this once again. Truly, what we experienced on the law enforcement and the support front, was the one Albuqerque spirit.”