After hype and controversy, Prince Harry’s memoir goes on sale 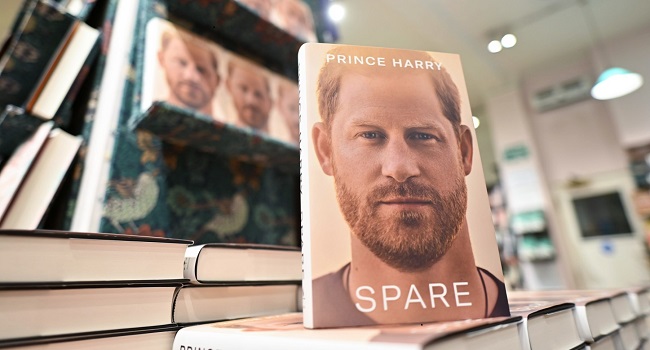 London, Jan 10 (AFP/APP): After months of anticipation and a blanket publicity blitz, Prince Harry’s autobiography “Spare” went on sale Tuesday as royal insiders hit back at his scorching revelations.
The royal family led by King Charles III and Harry’s elder brother Prince William have maintained a studied silence as painful details from the book and a round of pre-publication TV interviews have piled up.
In “Spare”, Harry, 38, portrays his father, 74, as emotionally crippled, the victim of brutal childhood bullying.
But among the many contradictions in the book, Harry also characterises the king as a doting father, who favours strong French aftershave and conducts headstands in his underwear to alleviate polo-induced back pain.
“He never forgot that I didn’t like the dark, so he’d gently tickle my face until I fell asleep,” the 38-year-old Duke of Sussex recollects of his childhood.
But palace insiders quoted in the UK press said Harry had crossed a line in attacking Queen Consort Camilla, Charles’s second wife following the death of Princess Diana, William and Harry’s mother.
“He has been kidnapped by a cult of psychotherapy and (wife) Meghan,” one royal source told The Independent newspaper.
“It is impossible for him to return (to Britain) in these circumstances,” it said, as other sources accused Harry of betraying both his father and brother.
The book opens with an epigraph drawn from US author William Faulkner — which Harry writes he found on the website BrainyQuote.com.
“The past is never dead. It’s not even past,” it says, setting the stage for 410 pages of ghost-written prose dominated by Harry’s trauma over Diana’s death, score-settling with his family, and hatred of the British media.
UK journalists are a “pack of monsters” and on press tycoon Rupert Murdoch, Harry writes: “I couldn’t think of a single human being in the 300,000-year history of the species who’d done more damage to our collective sense of reality.”