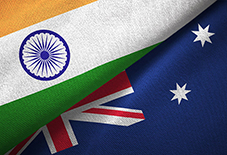 Australia’s deputy PM and defense minister, Richard Marles, kicked off a four-day visit to New Delhi on Monday, during which he is expected to meet his Indian counterpart and other top ranking officials.
“India is one of Australia’s closest security partners and the Albanese Labor Government is focused on revitalizing Australia’s historically deep engagement with our partners across the Indo-Pacific,” Marles said in a Facebook post on Tuesday.
Ahead of the trip, the ministry announced that Marles would be meeting with his counterpart Rajnath Singh, Foreign Minister Subrahmanyam Jaishankar, as well as other national security policymakers, seeking to “work closer with India in support of an open, inclusive and resilient Indo-Pacific.”
“The rules-based international order that has brought peace and prosperity to the Indo-Pacific for decades is experiencing pressure, as we face shifts in the geostrategic order,” Marles added.
Though the Australian officials described the goal of the trip only in broad terms, the meetings reflect growing security ties between New Delhi and Canberra, whose strategic partnership intensified after signing a 2020 deal to grant mutual access to each other’s military bases. The Mutual Logistics Support Agreement (MLSA) also steps up logistics and maintenance assistance between the two sides, in addition to boosting overall defense cooperation.
The visit also coincides with heightened tensions between Australia and China, after Beijing signed a security pact with the Solomon Islands, a Pacific nation located about 1,000 miles (1,700km) off Australia’s northeastern coast. Officials in Canberra have repeatedly denounced Beijing over the security deal, suggesting it would use the agreement to establish a military foothold far outside its borders.
Australia’s new Labor government has vowed to “step up” its own presence in the Pacific after making China a major campaign issue during the recent elections