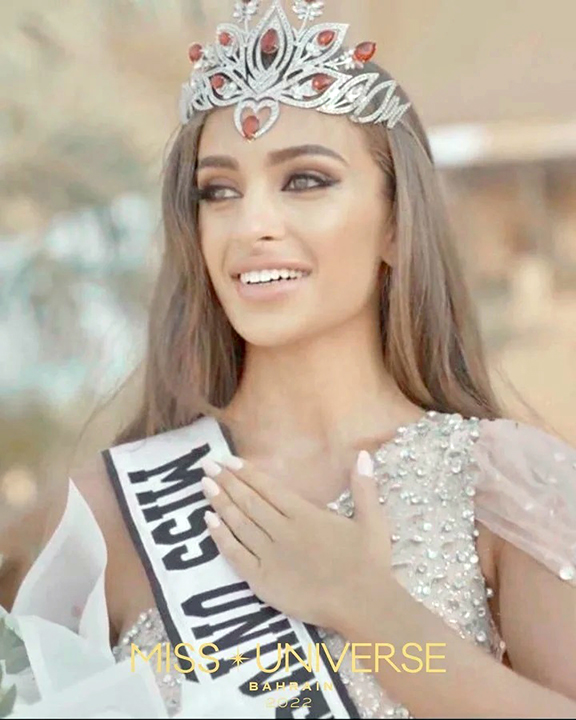 She was chosen by a judging panel that included Egyptian actress Mai Omar, the Black Eyed Peas’ Jrey Soul, and influencer Faryal Makhdoom, among others.

Coming in first runner-up place was 18-year-old Lujane Yacoub and filling in the third spot with a tie at second runner-up were Mariam Naji from Raffi and Shereen Ahmed from Manama.

“My main purpose in life is to find success (and) to believe in myself because I struggled a lot with this problem in my life. And I realised that whenever you believe in yourself, you can achieve anything. And I want to say to everybody watching to believe in themselves as well just as how me and my sisters believed in ourselves,” said an emotional Abdullah-Khalifa in an interview with Arab News.

The glamorous Miss Universe Bahrain 2022 beauty pageant kicked off on Sept. 7 with a series of online episodes, with the final episode premiering on Sunday night to reveal the new beauty queen.

Born to a Bahraini father and Russian mother, the winner declares herself to be an advocate for education and also seeks to raise awareness about anorexia, which she suffers from.

When asked about her Miss Universe Bahrain 2022 experience, Abdullah-Khalifa said to Arab News, “Beauty pageants changed me a lot. In this short time, I have become a totally different person, a better version of myself.”

The top seven finalists shot the eight-part series and engaged in several activities to further promote their various advocacies and charitable missions.

The first edition of Miss Universe Bahrain, which took place last year, crowned model Manar Jess Deyani, who made history for being the shortest-ever candidate of the Miss Universe pageant standing at 154.9 cm.

She also made waves when she chose not to wear a traditional swimsuit at the show’s preliminary round, receiving a lot of support and recognition from women and the community she represents.

“For me, this is what this show is all about: Celebration of individuality and freedom to choose especially on their clothing choices. I was very lucky to experience the Miss Universe pageant last year and I am so thankful to the whole team at Miss Universe because they are very sensitive and are all aware about culture and representation, so when I arrived there at the competition, they gave me an option to wear burkini during the swimwear competition round, which for me is so empowering as a lot of women can relate to that choice and statement I made the moment I stepped out of the stage,” said Deyani in a statement.