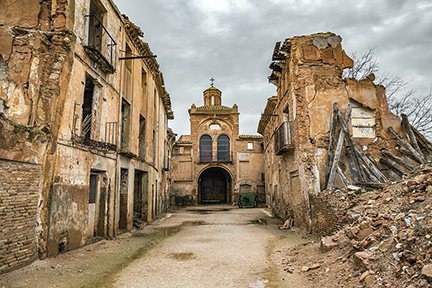 Belchite, Spain, July 14 (AFP/APP): Like many Spanish villages, Belchite was devastated by Spain’s 1936-39 Civil War.
But it is the only one that looks largely as it did at the end of the conflict, with piles of rubble strewn about, the clock tower barely standing, and mass graves.
“Here we found men, women, and children,” said Ignacio Lorenzo, a 70-year-archaeologist as he exhumes the last skeletons from a mass grave in this village in the northern region of Aragon.
“Their crime was to have voted for left-wing parties or to be members of a union,” he said.
The siege of Belchite was part of a Republican offensive in 1937 to capture Zaragoza, the capital of Aragon, from the Nationalists led by General Francisco Franco.
Franco went on to win the war and establish a dictatorship that lasted until his death in 1975.
The repression of Belchite by Nationalist forces at the start of the war resulted in the execution of 350 of its roughly 3,000 residents, according to witness testimony from survivors.
The grandparents of veteran Spanish singer Johan Manuel Serrat were among those killed.
Lorenzo and his team have so far found the remains of 90 missing Republicans in the cemetery, some of them with their hands and feet bound. Others displayed signs of having been tortured.
British historian Paul Preston, author of “The Spanish Holocaust”, estimates that 200,000 Spaniards were killed far from the front lines — 150,000 in areas controlled by Franco’s forces and the rest in Republican areas.
Franco’s regime honoured its own dead, but left its opponents buried in unmarked graves scattered across the country.
“There are still 114,000 disappeared,” mostly Republicans, Socialist Prime Minister Pedro Sanchez said earlier this week. Only Cambodia had more missing people, he added.
His government has drafted a law that, for the first time, will make exhumations of those who disappeared during the war a “state responsibility”. The bill faces its first parliamentary vote on Thursday.

Belchite was captured by Franco’s forces shortly after the start of the war, then taken over by the Republican camp a year later before being recaptured by the Nationalists.
The fighting left at least 5,000 dead and completely destroyed the village.
After the war, Franco visited Belchite and ordered it to be abandoned and preserved in its ruined states for propaganda reasons. A new village was built next door for the surviving residents.
The ruins of Belchite are now fenced off and can only be visited via a guided tour.
“A rupture took place after the civil war, the past was left behind,” said Mari Angeles Lafoz, a socialist councilwoman in Belchite.
Domingo Serrano, the mayor of Belchite between 1983 and 2003, strove during his mandate to preserve what was left of the old village but lacked any real means.
He himself was born in 1946 in “old Belchite”, in one of the few houses that had survived the war.
“We let it go downhill,” said Serrano. “It’s as if we thought it was better to forget it.”
But the seven million euros ($7.0 million) recently earmarked by the government for “old Belchite” were coming “40 years too late,” he said.

The ruins of Belchite — which include a cathedral pockmarked with bullet holes and gouged by mortar shells — were visited by 40,000 people in 2019 before the Covid-19 pandemic disrupted travel.
It has been dubbed “Spain’s Pompeii”, after the Roman city frozen in time when it was buried under ash from a volcanic eruption in 79 AD, said archaeologist Alfonso Fanjul.
The 48-year-old president of the Spanish Association of Military Archaeology heads a team of volunteers from around the world who clean and restore the village’s original cobblestones.
“I think it’s really one of the only places in the world that can this starkly remind you of something that has happened like this,” said one volunteer, Ellie Tornquist, a 24-year-old student from Chicago in the United States.
But the civil war continues to divide Spain.
While leftwing parties want to rehabilitate the memory of the Republican victims of the conflict, the right accuses them of seeking to open the wounds of the past.
The current mayor of Belchite, Carmelo Perez of the conservative Popular Party, admits the war is a “very sensitive issue”.
But the village “is a unique place in Spain” where we can “restore dignity” and create a place of peace, he said.