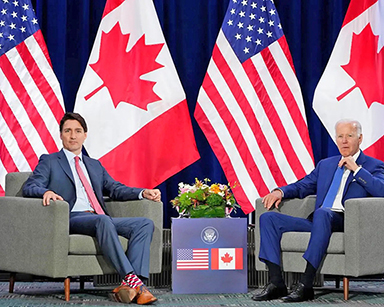 Mexico City, Jan 10 (AFP/APP): US President Joe Biden will travel to Canada in March for his first visit to the northern neighbor since taking office, the White House announced Tuesday.
At talks on the sidelines of a North American leaders’ summit in Mexico City, Biden told Prime Minister Justin Trudeau that he “looks forward to traveling to Canada in March of this year,” a statement said.
Biden and Trudeau discussed issues including joint efforts to boost economic competitiveness, tackle climate change, strengthen security cooperation and address irregular migration and instability in Haiti, according to the White House.
“The leaders highlighted recent coordinated actions to provide assistance to the people of Haiti and hold those fomenting violence accountable, including through sanctions,” the statement said.
“The two leaders committed to continue coordination with partners on the UN Security Council on next steps to support stability to Haiti, including support to the Haitian National Police,” it added.
Haiti’s government has appealed for international intervention as armed gangs take over large swaths of the poverty-stricken Caribbean nation.