Bill Gates warns about next pandemic 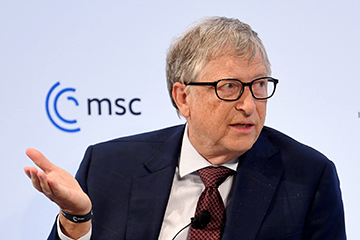 Billionaire Microsoft founder Bill Gates has warned the next pandemic may arise from a “virus that we already know about,” in an interview with El Diario on Sunday. He added that there is a 50% chance the next plague could appear within 20 years. In addition to a known virus, the next pandemic could be a human-made bioterror agent, or “something that makes the leap from the natural world” due to climate change, he said. Gates’ philanthropic efforts focus primarily on vaccination and climate change.
To ward off the next pandemic, countries must spend billions of dollars on researching potential pathogens, Gates suggested, calling for the creation of a 3,000-strong team of specialists with just such an assignment in his book published earlier this month. The task force, titled with the clever acronym GERM (Global Epidemic Response and Mobilization), would be funded via the World Health Organization, which would require an extra $1 billion per year – a 25% budgetary increase – so that it can be constantly on the lookout for potential outbreaks.
While the Covid-fatigued media has seized on monkeypox as the next killer plague du jour, Gates dismissed its potential to destroy humanity, noting “there is very little chance” it will become “the next great pandemic.” However, he praised the coverage, suggesting that “if it weren’t for the coronavirus pandemic, monkeypox wouldn’t even be in the news. And that’s good.”
Indeed, Gates didn’t completely shut out the possibility of monkeypox mutating to become something nastier, noting that it was necessary to maintain alertness because hundreds of cases of the virus had surfaced in Europe, where it is not normally found. The first monkeypox clusters in Europe this year emerged in people who had traveled to West Africa, where the disease is endemic, and appeared almost exclusively in gay and bisexual men.
The WHO, which held an emergency meeting on monkeypox last week, has sent similarly mixed messages on the subject. The agency’s Epidemic and Pandemic Preparedness and Prevention chief Sylvie Briand said on Friday that the diagnosed cases were just “the tip of the iceberg” and that “many more cases” were lurking “undetected in communities,” at the same time reassuring people that “this is not a disease the general public should be worried about” because it doesn’t “spread fast” like Covid-19.
The software tycoon turned vaccine magnate warned earlier this month that the novel coronavirus wasn’t through with humanity just yet, suggesting the world was “still at risk of this pandemic generating a variant that would be even more transmissive and even more fatal.”
There was “way above a 5% risk that this pandemic, we haven’t even seen the worst of it,” he said.
The most recent widespread Covid-19 variant, omicron, was markedly less fatal than its predecessors, leading some to declare the pandemic over or to acknowledge it had reached endemic status, like the flu.
While Gates has no medical training or college degree, his 2015 prediction that the world was “not ready for the inevitable next pandemic” has since been hailed as prophetic by media outlets, many of which are funded by the Bill and Melinda Gates Foundation.