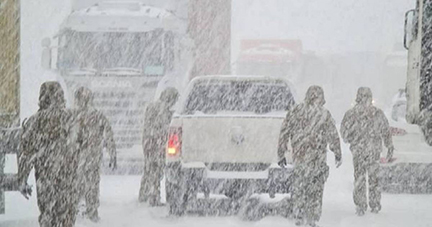 Buenos Aires, July 11 (AFP/APP): More than 400 people, including tourists and truckers, were stranded Sunday by a fierce snowstorm in the Andes mountains near the Argentina-Chile border, with temperatures plunging well below freezing, local officials said.
On the Argentinian side, 120 people were rescued early in the day by police and military personnel, but another 200 remained stranded at an altitude of more than 3,000 meters (9,842 feet).
More than 200 people are also still stranded on the Chilean side, police officer Hector Castro told Chilean media.
Hector Tello, an official from the Argentinian village of Las Heras, told channel C5N that “there are temperatures of minus 10 degrees Celsius (14 degrees Fahrenheit), with more than one meter of snow accumulated on the roads.”
The powerful winter storm hit Saturday, hammering the mountain road connecting the two countries and stranding more than 300 vehicles along the route. The Los Libertadores border crossing was shut down by authorities.
The region some 1,200 kilometers (745 miles) west of Buenos Aires has been hit by a polar cold snap.
Evacuees were moved to shelters in nearby towns, and Tello said officials were aiming to complete the remaining rescues by Monday.
Weather conditions, however, “continue to be bad,” he added.