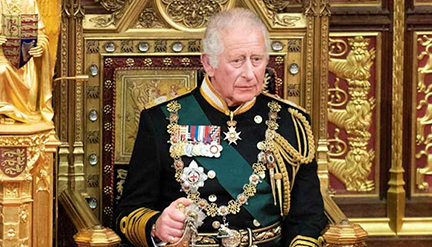 London, United Kingdom, Sept 22 (AFP/APP): Britain’s royals put on a united front at the funeral of Queen Elizabeth II but the new king now faces the delicate task of healing fractures to hold the family “firm” together.
With the eyes of the world on them, King Charles III and the rest of the royal family put their differences firmly aside to mourn the nation’s longest-serving monarch.
Millions of people worldwide watched Monday’s state funeral.
Getting back to work on Thursday, new heir to the throne Prince William and his wife Catherine met volunteers and staff who worked on the queen’s committal service at Windsor.
The national 10-day mourning saw the king’s brother Prince Andrew, as well as his younger son Prince Harry and daughter-in-law Meghan all, resume their place among senior royals.
Harry and Meghan, known as the Duke and Duchess of Sussex, have been absent from royal life in the past couple of years, with the pair making a string of damaging claims that have put the prince and his brother William at loggerheads.
The queen’s disgraced second son Andrew, 62, meanwhile, had been sidelined and stripped of his cherished honorary military titles over his friendship with the convicted paedophile Jeffrey Epstein.
“I think that they offered a united front. My feeling was that that was for the purposes of paying homage to one of the greatest Britons ever, during a mesmerizing spectacle,” royal expert Richard Fitzwilliams told AFP.
The 73-year-old king made a point of mentioning Harry and Meghan in his first speech to the nation and offered olive branches to both Andrew and Harry by waiving the bans on them wearing military uniform for a vigil by the queen’s coffin.
For their part, William and Catherine, the Prince and Princess of Wales, extended their own olive branch when they invited the Sussexes to view floral tributes to the late monarch with them.
For a few brief moments the two couples — once dubbed the “fab four” — were reunited.