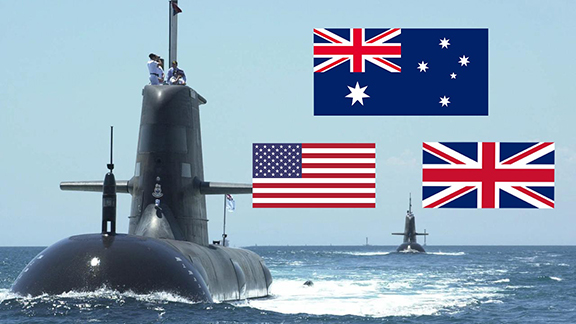 LONDON — Britain’s Royal Navy took charge of its fifth Astute-class nuclear submarine Aug. 31, but it was news that Australian submariners were going to train on the boat as part of the so-called AUKUS pact that caught much of the attention.

HMS Anson was commissioned at the Barrow-in-Furness yard of BAE Systems where the seven-strong Astute fleet is being built to replacing aging Trafalgar-class boats.

The guest list for the commissioning included Australian Deputy Prime Minister Richard Marles, who is also the defense minister, along with the soon-to-be-replaced British prime minister Boris Johnson and Defence Secretary Ben Wallace.

The Ministry of Defence took the opportunity of the commissioning to reveal that Royal Australian Navy personnel are already participating in specialized nuclear training courses conducted by the U.K. and United States.

More personnel are scheduled to follow next year ahead of Australian submariners undertaking training onboard HMS Anson and other Astute-class boats, as Canberra builds its nuclear know-how.

The training arrangement is among the first tangible co-operation results in the public domain after last year Australia, Britain and the U.S. agreed the pact to strengthen defense ties.

The pact, known as AUKUS, is principally focused on Australia eventually building a fleet of nuclear submarines using British and U.S. know-how.

The three-nation agreement resulted in the cancellation of a major deal with France to build a fleet of conventionally powered submarines, causing a serious political and industrial rift with Paris.

“Not only have we progressed our defense planning, but Minister Marles participated in the commissioning of our latest attack submarine, on which RAN submariners will be embarked as we develop our shared capabilities in the years ahead,” Wallace said on Wednesday.

With an eye to securing substantial work for British industry in the building of a fleet of Australian submarines, he added: “Built in a U.K. shipyard, HMS Anson demonstrates the very best of British industry, sustaining our world-leading, sub-surface capabilities and underlining the U.K.’s readiness to contribute them to shared security, especially with our closest allies Australia and the United States under the AUKUS initiative.”

“The completion of HMS Anson demonstrates the strength of British industry and its world-leading nuclear technology that will be leveraged to deliver the partnership,” said the MoD statement.

Australia already has substantial maritime co-operation with the British, having awarded BAE Systems a deal for Type 26 anti-submarine warfare frigates.

HMS Anson is scheduled to remain in Barrow for the next few weeks undergoing final checks before sailing to the Royal Navy’s Clyde nuclear submarine base in Faslane to prepare for sea trials.

Two further boats – Agamemnon and Agincourt – are in various stages of construction at Barrow as part of a £11.2 billion ($13 billion) overall investment in an Astute-class program. The effort was plagued by cost and time overruns, primarily in the early years of the work.

The last two boats are in advanced state of construction with the final submarine scheduled to leave Barrow by the mid-2020s.

Work on a replacement for the Astute boats is already underway.

The Royal Navy’s next generation of submarines, dubbed SSN-Replacement (SSNR), is already in early design and concept work stages, having formally got underway with an £85 million ($99 million) contract award in 2021.

Manufacturing work is underway on the first two Dreadnought submarines, with the first due to enter service in the early 2030s.