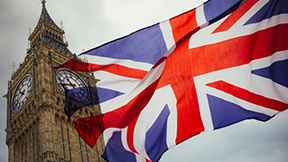 LONDON — Britain’s Ministry of Defence has identified a series of key future technologies in which it plans to invest $2.5 billion over the next four years, officials announced on June 7.
The program, called the Science & Technology Portfolio, will aim to underpin development of essential future military capabilities beyond the next generation, the MoD said in a statement. Efforts include the development of a hypersonic weapon demonstrator, new space capabilities, expanded research into artificial intelligence, advanced materials and nuclear submarine systems.
The government said it will spend £2 billion between now and 2026 as part of its £6.6 billion ($8.3 billion) total research and development budget earmarked in the 2021 Strategic Review.
The British military’s research arm, the Defence Science and Technology Laboratory, or Dstl, published its list of priorities for the spending plan earlier this week. It includes information about 25 programs in the portfolio expected to attract significant funding and collaborative opportunities for industry and academia.
“Notably, this portfolio pivots emphasis in science and technology towards key capability challenges and high-risk, generation-after-next research in emerging and little understood technologies,” reads a Dstl statement.
Defense officials highlighted a collaborative space program Dstl is conducting with the U.S. Naval Research Laboratory to illustrate its ambitions for the portfolio approach.
The Coordinated Ionospheric Reconstruction Cubesat Experiment (CIRCE) – a miniature space weather sensor suite onboard two satellites each the size of a cereal box – is planned for launch later this year.
The mission will see three British-developed sensors, alongside sensors provided by NRL, fitted to two Blue Canyon Technologies 6U satellites to collect space weather data.
Both of the CIRCE project satellites are slated to be launched alongside other payloads from a Virgin Orbit LauncherOne rocket mounted on the wing of a Boeing 747-400.
It would be the first-ever satellite launch undertaken from the U.K.
The aircraft is likely to be flown by Royal Air Force pilot Squadron Leader Matthew Stannard, who has already been part of a Virgin Orbit mission launching satellites from a base in California earlier this year.
The British miniature sensors have been developed for Dstl by University College London, the University of Bath and Surrey Satellite Technology.
The sensor suites will monitor changes within the ionosphere – a layer of the Earth’s atmosphere about 30 miles to 600 miles above the surface – where variations in the environment can interfere with the operation of GPS, communications and sensing technology.