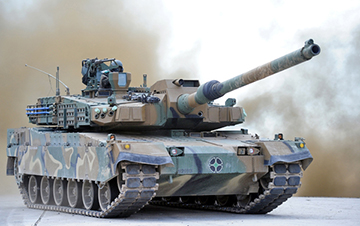 South Korea has already supplied its own K2 Black Panther tank to its army in considerable quantities and is now preparing to export more of these vehicles. Poland has already announced that it wants 180 of these machines. Slovenia, the Czech Republic, Romania, and several Middle Eastern countries are also in the queue. But would the Korean tank, made specifically for the needs of the Republic of Korea, be suitable for others?
By rethinking the technical solutions of American, German, French, Soviet, and possibly Chinese tanks, the Korean military-industrial complex eventually created a vehicle that has protection and armament meeting NATO standards but, at the same time, is similar in size to Russian lightweight battle tanks. The combat weight of the K2 is only 55 tons. The tank is equipped with the VIRSS soft-kill active protection, combining anti-missile and smoke-screening equipment. The tank information and control system, an onboard computer, automates combat operations (collecting and processing of intelligence data, fire control, and condition monitoring of vehicle parts and units) as much as possible. The hydro-pneumatic suspension changes the position of each roller. The tank is fitted with a Hyundai WIA CN08 120 mm smoothbore gun with a barrel length of 55 caliber and a rate of fire of up to 15 rounds per minute. The engine is a proprietary Doosan Infracore DV27K, but the tank is equipped with a German-made Renk transmission because the South Korean gearboxes were not reliable enough.
“The Black Panther” is technologically a very sophisticated machine and is extremely expensive: $8.8 – $9 million per unit (more expensive than the Abrams M1A2 SEP V3). The K2 has not taken part in real combat yet, so it’s still unclear how well it performs under fire.
In his commentary for Sputnik, Alexei Leonkov, a well-known Russian military expert, pointed out that the K2, packed with electronics, could prove to be unreliable in real combat situations.
“The K2 tank has an emphasis on electronics and automation. When electronics decide almost everything for a man, and this is justified by the fact that it makes life easier for the crew (even aiming the weapon at the target almost by itself). But this kind of crew, in case of an emergency situation, can become absolutely helpless,” he said.
Let’s take, for example, such an element of the active defense system as the aerosol camouflage automatic smoke system, which allegedly complicates the aiming of anti-tank weapons. According to the expert, it looks spectacular on the training ground, but in actual combat, there are so many weapons targeting the tank that the aerosol will not be enough.
“The South Koreans took the best from tanks of various schools, including the Soviet T-80U, and incorporated it into their own. The resulting machine is not one of the heaviest main battle tanks in terms of weight and dimensions, but its overstuffed electronics make it insanely expensive. The machine can work miracles on the training ground. But in real combat, these ‘miracles’ quickly come to an end. Other questions arise: how to operate this tank under combat conditions? How to repair it? How to keep all this electronic filling in working order during the life cycle? It turns out to be super expensive! Besides, how will the K2 behave in another theater of war: in the tropics or in low temperatures? There is no answer to that,” Leonkov noted.
“By the way, pilot military operations of the Russian T-14 Armata, including ‘rigorous combat effectiveness tests’, confirmed that the electronic ‘super gizmos’ play almost no role in combined arms combat, although they look promising,” he added.
According to the expert, the Black Panther risks repeating the unsuccessful path of the American Abrams M2 SEP4. The US sold this “unkillable” machine, stuffed with electronics, to Saudi Arabia. The weakly armed Houthis found a way to “kill” this tank. A shot from a sniper rifle was able to hit one of the remote sensors and the tank immediately “stumbled” as its software began self-testing. It took just a few seconds to hit the tank with a hand grenade launcher or fire an anti-tank-guided missile. The result was incredible: the “super-engineered” vehicle had its turret torn off like a World War II tank.