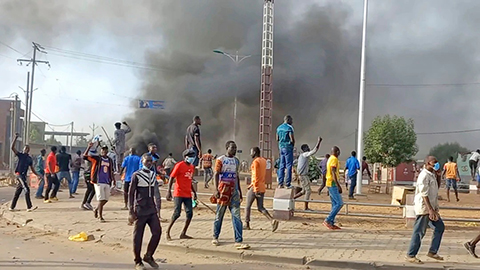 N’Djamena, Dec 5 (AFP/APP): A Chadian court has handed jail terms of between two and three years to 262 people who were arrested after deadly protests in October, the public prosecutor said on Monday.
A total of 401 people had been put on trial in Koro Toro prison, a high-security jail located in the desert 600 kilometers (375 miles) from the capital N’Djamena.
Lawyers had boycotted proceedings on the grounds of the “illegal” transfer far from the public gaze for the trial.
Of the others, 80 were given suspended terms and 59 were acquitted, prosecutor Moussa Wade Djibrine said.
The trial ended on Friday after four days, with only state TV having the right to provide coverage, and the sentences were announced on Monday after the prosecutor returned to the capital.
The defendants were charged with taking part in an unauthorised gathering, destroying belongings, arson and disturbing public order.
Around 50 people, including 10 members of the security forces, died when police opened fire on demonstrators in N’Djamena and several other cities on October 20, according to an official toll.
But opposition groups say the real count was much higher, and allege unarmed civilians were massacred.
Local and international NGOs, the European Union and the African Union condemned the bloody crackdown and the use of violence against civilians.
Chadian lawyers stopped working during and after the trial, with the Chad Bar Association calling it a “parody of justice” as the defendants were “kidnapped” and “deported” to Koro Toro.
The bar said it would appeal the court’s decision and resume work on Tuesday.
The protests had been called to mark the date when Chad’s ruling military had initially promised to cede power — a timeline that has now been extended by two years.

Strongman General Mahamat Idriss Deby Itno accused the demonstrators of “insurrection” and attempting to stage a coup.
Deby, 38, took power when his father, Idriss Deby Itno, who had ruled the arid Sahel state for 30 years, died during an operation against rebels in April 2021.
The authorities had previously said that 601 people, including 83 minors, were arrested in the N’Djamena area alone and taken to Koro Toro, a remote location two days by road from the capital.
Around 80 minors held there have been taken back to N’Djamena, where they will remain in a prison before appearing in a special court for children, the prosecutor said.
The Central Africa director for Human Rights Watch, Lewis Mudge, told AFP he was “concerned” for them after their long detention at Koro Toro far away from their families.
The state of emergency decreed in N’Djamena and other cities on the evening of October 20 was lifted on Monday.
Amnesty International has denounced what it said was the denial of the right to a fair and public trial, the preparation of a defence case and access to information.
The main leaders of Chad’s opposition now live in hiding or in exile.