China and Russia may carry out joint naval patrol 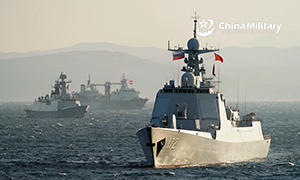 According to public reports, on Saturday afternoon, the Chinese tactical naval flotilla participating in the Russian Vostok-2022 exercise conducted a joint drill with Russian warships in the Sea of Japan on subjects such as navigation in formation and sweeping of floating mines. The Chinese People’s Liberation Army Navy participated in the exercise with a flotilla of naval vessels consisting of Type 055 large destroyer Nanchang, the Type 054A guided-missile frigate Yancheng and the Type 903A comprehensive supply ship Dongpinghu.

The Chinese and Russian vessels are likely to carry out another joint maritime patrol after the Vostok-2022 exercise, as they did in 2021, experts told the Global Times.

At present, the interaction between China and Russia in various fields of military affairs has been normalized, and it is not being ruled out that the second joint naval patrol will be held after the end of the exercises, Chinese military expert Song Zhongping told the Global Times on Sunday.

Under the current situation, it is crucial for China and Russia to strengthen comprehensive cooperation, especially in the military field, which helps maintain regional peace and stability, but military cooperation does not target third parties, said Song.

After the China-Russia Joint Sea-2021 military exercise, the Chinese and Russian navies formed a joint formation and carried out their first joint naval patrol in October 2021. During the seven-day cruise, a combined warship flotilla conducted drills of joint navigation, joint maneuvering and live-fire use of weapons as the vessels sailed across the Sea of Japan, the West Pacific and the East China Sea.

“The joint exercise and joint cruise have further developed the China-Russia comprehensive strategic partnership of coordination for the new era, and effectively improved both sides’ capabilities of joint operations, which was conducive to jointly maintaining international and regional strategic stability,” said Bai Yaoping, director of the Chinese side and deputy commander of the navy under the PLA Northern Theater Command.

A military expert told the Global Times on the condition of anonymity that the normalized China-Russia joint naval patrol is conducive to deepening the strategic mutual trust between the two countries, improving their respective maritime operational capabilities, and jointly responding to maritime threat capabilities.

If China and Russia conduct a second joint naval patrol, Western media are expected to continue hyping the matter again. But previous facts have repeatedly proved that China can and will participate in any exercise and patrol with any country it chooses, he said.

The ongoing maneuvers of the Vostok-2022 are seeing participation by Algeria, India, Belarus, Tajikistan and Mongolia, among other countries from September 1 to 7. It involves over 50,000 military personnel, more than 5,000 weapons and pieces of military equipment, including 140 aircraft, 60 warships, boats and support vessels, according to the Russian Defense Ministry.