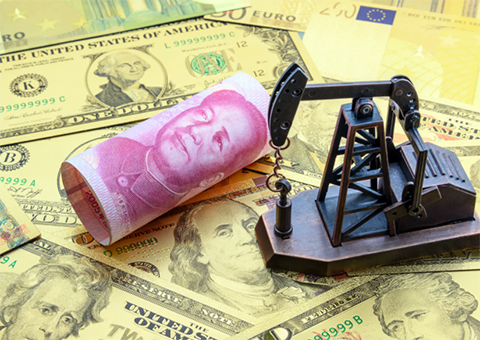 The long-mooted prospect of the end of the U.S. dollar’s hegemony in the global oil and gas markets took another step towards realisation last week with the announcement that Russian and Chinese hydrocarbons giants, Gazprom and China National Petroleum Corporation (CNPC) have agreed to switch payments for gas supplies to rubles (RUB) and renminbi (RMB) instead of dollars.

In the first phase of the new payments system, this will apply to Russian gas supplies to China via the ‘Power of Siberia’ eastern pipeline route that totals at minimum 38 billion cubic metres of gas per year (bcm/y). After that, further expansion of the new payments scheme will be rolled out. It is apposite to note at this point that although ongoing international sanctions against Russia over its invasion of Ukraine in February has provided the final impetus for this crucial change in payment methodology, it has been a core strategy of China’s from at least 2010 to challenge the U.S. dollar’s position as the world’s de facto reserve currency. China has long regarded the position of its renminbi currency in the global league table of currencies as being a reflection of its own geopolitical and economic importance on the world stage. As analysed in depth in my latest book on the global oil markets, an early indication of China’s ambition for the RMB was evident at the G20 summit in London in April 2010, when Zhou Xiaochuan, then-governor of the People’s Bank of China (PBOC), flagged the notion that the Chinese wanted a new global reserve currency to replace the U.S. dollar at some point. He added that the RMB’s inclusion in the IMF’s Special Drawing Right (SDR) reserve asset mix would be a key stepping-stone in this context. At that time, at least 75 percent of the then-US$4 trillion daily turnover in the global foreign exchange (FX) markets, as determined by the Bank for International Settlements (BIS), was accounted for by the ‘Big Four’ international currencies: the U.S. dollar (USD), the Eurozone’s euro (EUR), the British pound (GBP), and the Japanese yen (JPY). Aside from dominating daily FX markets turnover, currencies in the SDR also dominate in the payment, reserves, and investment currency functions in the global economy. Enormous media fanfare in China followed the RMB’s inclusion in the SDR mix in October 2016, when it was assigned a weighting of 10.9 percent (the USD had a 41.9 percent share, the EUR 37.4 percent, GBP 11.3 percent, and JPY 9.4 percent). As of 2022, the RMB’s share in the SDR mix has risen to 12.28 percent, which China still regards as not truly befitting its rising superpower status in the world.

China has also long been acutely aware of the fact that, as the largest annual gross crude oil importer in the world since 2017 (and the world’s largest net importer of total petroleum and other liquid fuels in 2013), it is subject to the vagaries of U.S. foreign policy tangentially through the oil pricing mechanism of the U.S. dollar. This view of the U.S. dollar as a weapon has been powerfully reinforced since Russia’s invasion of Ukraine and the accompanying U.S.-led sanctions that have followed, the most severe of which – as with sanctions on Iran from 2018 – relate to exclusion from use of the U.S. dollar. The former executive vice-president of the Bank of China, Zhang Yanling, said in a speech in April that the latest sanctions against Russia would “cause the U.S. to lose its credibility and undermine the [U.S.] dollar’s hegemony in the long run.” She further suggested that China should help the world “get rid of the dollar hegemony sooner rather than later.”

Russia itself has long held the same view on the advantages for it of removing the U.S. dollar’s hegemony in global hydrocarbons pricing, but, while China was unwilling to overtly challenge the U.S. during the height of its Trade War under the highly unpredictable former U.S. President Donald Trump, it could do little about it on its own. A sign of Russia’s intent, though, came just after the U.S. reimposed sanctions in 2018 on its key Middle Eastern partner, Iran, when the chief executive officer of Russia’s Novatek, Leonid Mikhelson, said in September of that year that Russia had been discussing switching way from US$-centric trading with its largest trading partners such as India and China, and that even Arab countries were thinking about it. “If they [the U.S.] do create difficulties for our Russian banks then all we have to do is replace dollars,” he added. At around the same time, China launched its now extremely successful Shanghai Futures Exchange with oil contracts denominated in yuan (the trading unit of the renminbi currency). Such a strategy was also tested initially at scale in 2014 when Gazpromneft tried trading cargoes of crude oil in Chinese yuan and rubles with China and Europe.

This idea again resurfaced following the latest international sanctions imposed on Russia following its invasion of Ukraine. Almost as soon as they were introduced, Russian President Vladimir Putin signed a decree requiring buyers of Russian gas in the European Union (EU) to pay in rubles via a new currency conversion mechanism or risk having supplies suspended. This threat nearly succeeded in exploiting existing fault lines running through the U.S.-led NATO alliance, as major EU consumers of Russian gas scrambled to work out how to appease Putin’s ruble payment demands, without overtly breaking any sanctions. Since then, Russia has simply toyed with the EU over ongoing gas supplies, most recently last week with its statement that it has scrapped the resumption of on/off supplies from the Nord Stream 1 pipeline – one of the main supply routes to Europe – after “discovering a fault during maintenance.” The scale and scope of this implicit threat was underlined again last week when Putin said that Russia might cut off all energy supplies to the EU if price caps are imposed on Russia’s oil and gas exports.

The further expansion of other currencies – realistically only the RMB – to subvert the dominance on U.S. dollar-pricing of oil and other hydrocarbons is also dependent on the currency’s use in countries other than those already under U.S.-led sanctions. Happily, for China, another leader of the Middle Eastern world (to add to Iran, which already utilises RMB and RUB trading) – Saudi Arabia – has shown very willing to expand its RMB-dominated business with China, including as payment for oil supplies. As long ago as August 2017, as also analysed in depth in my latest book on the global oil markets, the then-Saudi Vice Minister of Economy and Planning, Mohammed al-Tuwaijri, told a Saudi-China conference in Jeddah that: “We will be very willing to consider funding in renminbi and other Chinese products.” He added: “China is by far one of the top markets’ to diversify the funding…[and] we will also access other technical markets in terms of unique funding opportunities, private placements, panda bonds and others.”

Given that the vast majority of Saudi government borrowing (including large bond and syndicated loan facilities) in the previous few years has been denominated in U.S. dollars, a switch away from USD-funding would allowed Saudi more flexibility in its overall financing structure, albeit after an initial dislocation connected to its de facto currency peg to the U.S. currency. In the past few months, there has certainly been a noticeable further shift by Saudi Arabia towards China, as exclusively catalogued by OilPrice.com. Most recent was the signing in August of a multi-pronged memorandum of understanding (MoU) between the Saudi Arabian Oil Company – formerly the Arabian American Oil Company – (Aramco) and the China Petroleum & Chemical Corporation (Sinopec). As the president of Sinopec, Yu Baocai, himself put it: “The signing of the MoU introduces a new chapter of our partnership in the Kingdom…The two companies will join hands in renewing the vitality and scoring new progress of the Belt and Road Initiative [BRI] and [Saudi Arabia’s] Vision 2030.” The scale and scope of the MoU is enormous, covering deep and broad co-operation in refining and petrochemical integration, engineering, procurement and construction, oilfield services, upstream and downstream technologies, carbon capture and hydrogen processes. Crucially for China’s long-term plans in Saudi Arabia, it also covers opportunities for the construction of a huge manufacturing hub in King Salman Energy Park that will involve the ongoing, on-the-ground presence on Saudi Arabian soil of significant numbers of Chinese personnel: not just those directly related to the oil, gas, petrochemicals, and other hydrocarbons activities, but also a small army of security personnel to ‘ensure the safety of China’s investments’.