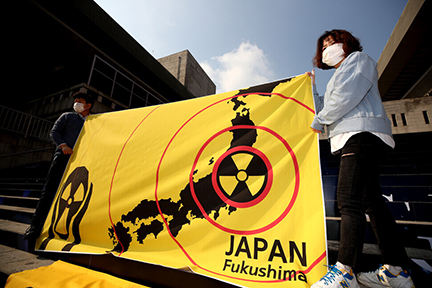 Japan’s nuclear regulator has given its final approval to a controversial plan to release over 1.3 million tons of water stored at the crippled Fukushima nuclear power plant, triggering a harsh response from its neighbor China over unpredictable consequences for the environment.
“The disposal of nuclear-contaminated water in Fukushima could affect the global marine environment and the public health of Pacific-rim countries. It is by no means a private matter for Japan,” Foreign Ministry Spokesperson Wang Wenbin said in response to the Friday decision.
“If Japan insists on putting its own interests above the public interest of the international community and insists on taking the dangerous step, it will surely pay the price for its irresponsible behavior and leave a stain in history,” he added.
The Fukushima Daiichi plant cooling systems were knocked out when it suffered three meltdowns in the wake of a 9.0-magnitude earthquake and a subsequent devastating tsunami in 2011. At the time, large quantities of contaminated water flowed into the Pacific, prompting mass evacuations from areas along Japan’s east coast.
The water, used to cool reactors in the aftermath, has been stored in hundreds of tanks at the plant ever since. Even though it was filtered and passed an advanced treatment process, which removed much of the radioactive contamination, it still contains some radioactive isotopes, mostly tritium.
The disposal plan, officially approved by Japan’s Nuclear Regulation Authority on Friday, will see this wastewater released about one kilometer off the Fukushima prefecture coast through an underwater tunnel. Tokyo hopes to launch the process by next spring, and the discharge may take decades as tritium-contaminated water has to be released slowly and diluted to levels in line with Japanese regulations.
Japanese authorities told the operator of the plant, Tokyo Electric Power Company Holdings Inc. (TEPCO), on Friday it should “try to reduce the amount of water contaminated with radioactive materials and streamline work toward the discharge.”
The discharge plan, deemed by Japan as the only viable option, has long stoked controversy in Japan and beyond. Fishermen in the Fukushima Prefecture have been protesting over fears the water could be harmful to residents and wildlife. Activists in South Korea and elsewhere in the region have also opposed the plan, in addition to the Chinese government repeatedly voicing concerns about pollution.