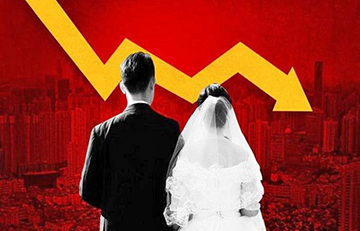 China’s annual rate of new marriages has fallen to the lowest point in more than three decades, contributing to the country’s already declining birth rate, news agency Yicai reported on Thursday, citing the National Bureau of Statistics. Covid-19 restrictions, education, and the cost of living were said to be among the key reasons for the decline.

Around 11.58 million people registered their first marriage in China in 2021, down by 708,000 from the year before. It is the first time since 1985 that the annual number of people entering their first marriage has fallen under 12 million. The same metric peaked with 23.8 million in 2013, but has since decreased by 51.5%, according to the report.

Song Jian, a demographer at the Center for Population and Development Studies at Renmin University told the Global Times on Friday that the declining marriage rate was due to a rise in the age at which people tie the knot for the first time, mainly due to more access to higher education and “young people seeking professional stability before getting married.” Song added that reduced in-person contacts during the Covid-19 pandemic and the high cost of raising children are also among the major factors.

The expert said the lowered marriage rate will contribute to China’s declining birth rate. Around 10.6 million babies were born in China last year, the lowest total since 1961, according to Sixth Tone magazine.

After decades of restrictions on the number of children per family, authorities are now encouraging couples to have more babies in the face of China’s aging population and a high gender imbalance ratio.

Beijing ended the one-child policy in 2015, thereby allowing couples to have two children. Since last year, they’ve been allowed to have up to three children. President Xi Jinping promised in October to unveil a “proactive” set of policies to boost the birth rate and tackle aging.