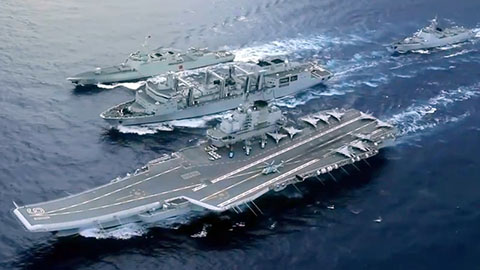 Shanghai, June 17 (AFP/APP): China on Friday launched its third aircraft carrier, the first designed and built entirely in the country, marking a major military advance for the Asian superpower.
The announcement comes as tensions between China and the United States have ramped up significantly in recent weeks over Beijing’s sabre-rattling towards self-ruled Taiwan, which it views as a breakaway province to be seized by force if necessary.
Launched in a Shanghai shipyard to great fanfare, the Fujian is more technically advanced than the other Chinese carriers.
It is the “first catapult aircraft carrier wholly designed and built by China”, said state broadcaster CCTV.
The Fujian will take years before it reaches operational capacity, as the Ministry of Defence has not announced a date for entry into service.
“Sailing and mooring tests will be carried out as planned after the ship is launched,” CCTV reported.
China has two other aircraft carriers in service.
The Liaoning was commissioned in 2012, and the Shandong entering service in 2019.
Unlike the Fujian, they use a ski-jump style platform to launch aircraft and do not have a catapult launcher system.
The United States currently has by far the most aircraft carriers in service at 11 ships, followed by China and Britain at two each, according to defence magazine Janes.
Chinese warships have repeatedly sailed through the strait that separates the island from the mainland, and used fighter jets to repel freedom of navigation patrols from the United States and its allies.
Chinese defence minister Wei Fenghe last week warned his US counterpart that Beijing would “not hesitate to start a war, no matter the cost” if Taiwan declared independence.
– Military modernisation –
Chinese President Xi Jinping has overseen a massive overhaul of the People’s Liberation Army (PLA) since coming to power in 2012, and has vowed to build a “fully modern” force rivalling the United States military by 2027.
The growth of China’s military comes at a time of ramped-up geopolitical tensions as Washington looks to shore up military alliances in the Asia-Pacific region.
Last year, the United States secured a historic deal with Britain to share nuclear submarine technology with Australia and has since made multiple arms sales to Taiwan, provoking angry responses from Beijing.
Meanwhile, China brokered an unprecedented security agreement with the Solomon Islands earlier this year which blindsided Washington and its allies, stoking fears of another Chinese military base in the Pacific.