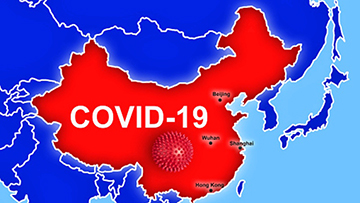 BEIJING: China reported two new deaths from COVID-19 on Monday, both elderly Beijing residents, as several major cities persisted with strict virus curbs despite a much-touted recent loosening.
The last major economy wedded to a zero-COVID-19 policy, Chinese authorities have continued to impose snap lockdowns, mass testing and lengthy quarantines in response to emerging outbreaks.
Despite the central government this month announcing its most significant easing of the measures so far, authorities in many areas have stuck to hard-line curbs as the number of new cases has spiked.
Monday’s deaths involved a 91-year-old woman with a history of stroke and Alzheimer’s disease, and an 88-year-old man with a history of cancer, bronchitis and stroke, local authorities said.
On Sunday, Beijing announced China’s first COVID-19 fatality since May, an 87-year-old man whose mild case worsened after he contracted a bacterial infection.
New cases in the capital jumped to 962 on Monday from 621 the day before, as authorities maintained a patchwork of restrictions in an effort to extinguish emerging flare-ups.
Nearly 600 areas of the city are currently “high-risk,” a designation that typically requires residents to isolate for several days in their housing units or move to state quarantine facilities.
In some neighborhoods, schools have been ordered to move classes online and office employees told to work from home.
Hard-line curbs were also in place in cities including the southern industrial hub of Guangzhou — where tens of thousands of new cases have emerged in the past week — and northern Shijiazhuang, where officials have ordered residents in six districts to undergo mass testing.
China recorded around 27,000 new domestic cases on Monday, according to the National Health Commission — a tiny fraction of its vast population but a steep increase for a country accustomed to figures in the dozens or low hundreds.
While the zero-COVID-19 policy has generally kept the number of new cases low, the approach has been tested in recent months by the emergence of virus variants that spread faster than officials can extinguish them.
The strategy has also stifled economic growth, isolated Beijing on the international stage and even sparked rare protests in a country where dissent is routinely crushed.
Earlier this month, the government issued 20 rules for “optimizing” zero-COVID-19, reducing quarantine times for overseas arrivals and simplifying a system for assessing the risk of transmission, among other tweaks.
Multiple Chinese cities then canceled routine mass COVID-19 tests in a move that added to hopes of an eventual reopening.
But Asian markets fell Monday as Sunday’s COVID-19 death sparked fears officials would reimpose strict, economically painful restrictions.
Hong Kong’s Hang Seng Index fell nearly two percent — extending a sell-off at the end of last week — while Shanghai was also down.