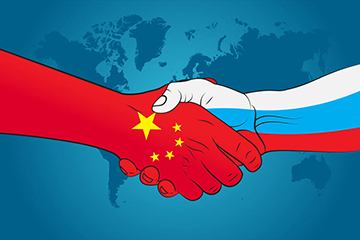 Chinese and Russian companies have reached agreements on key industries such as energy, food and other daily commodities on the sideline of the St. Petersburg International Economic Forum (SPIEF) from June 15-18, as the two countries are unleashing greater potentials in bilateral trade to boost the regional economy.
China National Petroleum Corporation’s deputy general manager Huang Yongzhang held a video talk on Thursday with vice president of Russia’s Gazprom, during which they signed a technical agreement on a Russia-China Far East Gas Supply project to strengthen energy cooperation, according to China National Petroleum Corporation on Friday, a move that experts said would be a further expansion of Russian energy supplies to China.
While there were no further details about the agreement, experts said the deal would be more about the expansion of the capacity of energy trade based on the pipelines that have already been operating.
The “Power of Siberia 1” natural gas pipeline was opened between China and Russia as early as December 2019, with a gas transmission capacity upgraded to 53 billion cubic meters in 2021.
The two sides have reached cooperation intention for the energy projects in the China-Russian Far East last year, and the signing of the agreement is to specify the plan with more feasible details, which is very important for China-Russian energy cooperation, Li Ziguo, a senior research fellow with the China Institute of International Studies, told the Global Times on Friday.
The latest signing of the gas supply agreements between large companies of the two countries will make supply and prices more sustainable and stable, Song Kui, president of the Contemporary China-Russia Regional Economy Research Institute, told the Global Times on Friday.
China currently relies on imports for about 45 percent of its natural gas consumption, mainly from Russia, Myanmar, Central Asian countries and offshore LNG projects with Australia and Qatar, with Australia being one of China’s largest natural gas suppliers, accounting for nearly half of China’s imports, according to media reports.
The strengthening of the gas trade between China and Russia is to further diversify the sources of supplies instead of too much reliance on any particular source, experts said.
“But instead of adding new pipelines, there could be more of an expansion of the trading capacity through the current one, ‘Power of Siberia 1,'” Lin Boqiang, director of the China Center for Energy Economics Research at Xiamen University, told the Global Times on Friday, adding that there is a foreseeable bigger potential for the two sides to explore the clean energy trading sector.
In 2021, China’s imports of energy products from Russia reached 334.29 billion yuan, a year-on-year increase of 47.4 percent, accounting for 65.3 percent of China’s total imports from Russia that year, according to the General Administration of Customs. Experts believe that as the trade ties go deeper and wider, this trend may continue this year.
In addition to the signing of energy cooperation, Chinese and Russian companies also signed a number of memorandums of cooperation involving trade in food and other daily necessities as both sides seek to unleash the potential in the cross-border supply chain.
Driven by widening potentials for cooperation, China and Russia are moving toward cooperation in the entire industrial chain, including transportation, experts said.
“Russia is facing the narrowing of westbound cooperation, and China and Russia will need a huge space for improvement in the field of transportation and logistics, including the further improvement in the capacity of the China-Europe freight trains,” Li said.