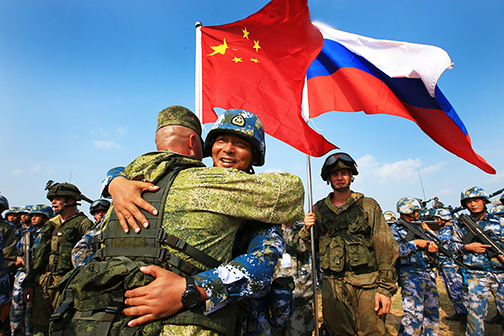 The Chinese People’s Liberation Army (PLA) has dispatched forces to join the upcoming Vostok-2022 in Russia, with PLA ground and air forces having already arrived at the designated drill region and naval forces being rendezvoused with Russian warships at sea. This is the first time the PLA has sent three of its forces to participate in a single Russian drill, observers said.

Based on the annual China-Russia military cooperation plan and consensus reached by the two sides, the PLA has dispatched some of its troops to Russia to take part in the Vostok-2022 exercise, Senior Colonel Tan Kefei, a spokesperson at China’s Ministry of National Defense, said at a regular press conference on Thursday.

Chinese ground and air forces have arrived at designated positions, as they have completed forces assembly, field camp establishment and site checks, with adaptive flight training missions underway, and the Chinese naval forces carried out communications exercises after having rendezvoused with Russian warships at sea, Tan announced.

This is the first time the PLA has sent its Army, Navy and Air Force at the same time to an exercise organized by Russia, observers said.

The Chinese armed forces’ participation in the Vostok-2022 exercise aims to deepen practical and friendly cooperation with the militaries of other participating countries, enhance the level of strategic coordination and strengthen the ability to deal with various security threats, Tan said.

China’s participation in the drills shows that the Chinese military can decide when to hold what kind of exercises with whom, based on its own security needs and training arrangements, regardless of interferences from the external situations, Zhang Xuefeng, a Beijing-based Chinese military expert, told the Global Times on Thursday.

It has nothing to do with the current international and regional situations, Zhang said, and the West should not over-interpret it.

China and Russia will learn from each other, as both militaries have their own advantages, Song said.

As two major military powers in the world, China and Russia’s military cooperation will also contribute to peace and stability in the region, deterrence buildups against external forces with evil intents and the fight against hegemony and power politics, Song said.