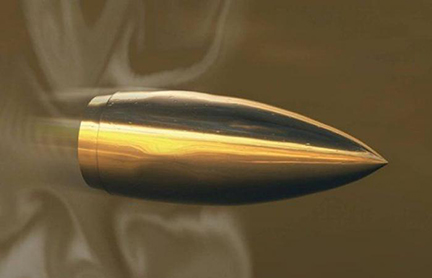 A team of researchers from an army medical center in Chongqing fired high-speed 5 mm steel bullets at sedated young male pigs to understand the potential impact of hypersonic weapons on the human body.

The bullets were fired at the thigh of each pig at a speed of around 13,000 feet per second (fps) (or 4000 meters per second) – 11 times the speed of sound. The researchers found that hypersonic bullets leave large craterlike wounds in the flesh but do not penetrate the skin and flesh as a ‘solid substance’ like traditional shots.

The shots did not immediately kill the pigs; however, shock waves from the bullets caused severe wounds throughout the body, as the researchers published in Acta Armamentarii, an official journal run by the China Ordnance Society, on August 22.

“Extensive damage to many organs can be seen at the time of injury, mainly including the fracturing of bones and bleeding in the intestine, bladder, lung, and brain,” said the team led by Wang Jianmin with the Department of Weapon Bioeffect Assessment at the Army Specialty Medical Centre in Chongqing.

Impact Of Hypersonic Bullets
The muzzle velocity of most guns is lower than 1,200 meters per second – 3 times the speed of sound – and in these cases, a bullet penetrates the skin and flesh as a solid substance.

However, at hypersonic speed, the temperature of a bullet can come close to the melting point, with the bullet and flesh turning into liquid and gas at the instant of impact.

Therefore, the physical process of the impact in the case of hypersonic bullets needs to be described as fluid mechanics, said the researchers.

“[The bullet] appears to be on fire when it comes into contact with the skin of the animal, suggesting that the steel ball itself bears a huge force when it hits, and the ball melts and shatters at high temperature,” the researchers observed in the paper.

“[It] forms a huge wound cavity similar to a hemispheric pit [crater], which is accompanied by a large amount of tissue spattering.”

Jianmin and his colleagues said more animal experiments would be carried out, targeting the head, chest, abdomen, and other body parts with more complex structures.

According to the team, while targets made out of soap could also produce similar results, simulating bullets’ movement and energy transfer process in soft tissue, animals were needed to understand the deadly characteristics of the projectiles on biological targets.

It remains unknown yet, whether China is developing a hypersonic firearm. The People’s Liberation Army (PLA) is known to have funded various projects on weapons that can fire small-sized projectiles at speeds exceeding Mach 5.

For example, the PLA Navy is developing rail guns for a ship defense system that can fire hypersonic projectiles to intercept enemy drones, missiles, or torpedoes. A railgun is an electromagnetic weapon capable of firing shells at Mach 7 — seven times the speed of sound.

In 2018, China conducted the world’s first live open-sea test with a railgun placed on a warship, during which the rail gun fired a 25-kilogram projectile reportedly at a velocity of Mach 7.3 and was able to hit a target 250 kilometers away.

Chinese scientists are also working on hypersonic missiles that could be launched from a railgun and could search for targets, according to a EurAsian Times report.

Even the US worked on railguns for decades before it halted its railgun program in July 2021 to free up resources for hypersonic weapon research. It lags behind China and Russia, which have already acquired operational hypersonic weapons.

However, it was not just the budget constraints that led the Pentagon to halt the railgun program, as there were also challenges related to wear and tear and energy consumption. After every 20 shots, the gun barrel needed to be replaced due to wear and other issues.

Even Japan has decided to develop an electromagnetic weapon system to face the threat of hypersonic weapons fielded by its neighbors such as China, North Korea, and Russia.

A total of 6.5 billion yen ($56 million) have been allocated in the fiscal 2022 budget for developing prototypes of military-use railgun technology. The system is expected to be operational after 2025.

Russia Developing A Hypersonic Sniper Rifle
So far, only a Russian defense contractor, Lobaev Arms, is known to be working on a hypersonic sniper rifle that could propel a bullet to nearly Mach 6 velocity.

Snipers have to consider various external ballistic factors, including wind values, elevation, and even air density, to realize maximum accuracy, and that too under narrow time limits. These estimations can vary depending upon target distance and environmental factors.

However, hypersonic bullets would enable the snipers to maximize accuracy by minimizing the impact of external factors by their drastically faster velocities, according to Lobaev.

The company told a Russian defense publication in 2017 that it is developing ammunition with a muzzle velocity of over 2,000 meters per second (roughly 6 Mach) that will allow a sniper “to shoot at a thousand meters without making adjustments.”

Also, the hypersonic munition can be fired up to seven kilometers, which is impressive considering that conventional rifles have a range between one and two kilometers.

These hypersonic cartridges will not be loaded with gunpowder, as it will not be able to provide enough pressure to realize such a high muzzle velocity. So Lobaev will use certain chemicals, which are under wraps.

Experts say that while it is theoretically possible to create such a cartridge, it will need a solid barrel and mechanisms, and the assembled rifle could be bulky.

According to Russian special forces veteran Sergei Goncharov, such a powerful rifle would make a lot of noise that would give away the sniper’s position. He also noted that the recoil of such a rifle would be twice as powerful as standard sniper rifles.

Goncharov further said that if the rifle weighed 20 kilograms, it would simply be impossible for the sniper to carry it around.

Lobaev admits that a hypersonic rifle will be less durable than a conventional one because of chemical cartridges. Therefore the company maintains that its hypersonic rounds are not a replacement for traditional sniper ammunition but a cost-effective option in specific use cases with extremely severe environments or long ranges.