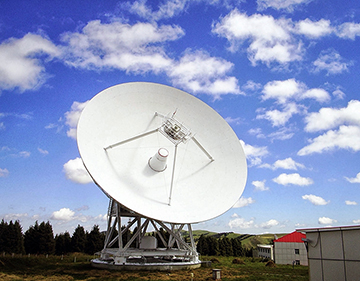 Northwest China’s Xinjiang Uygur Autonomous Region will become home to the world’s most powerful steerable 110-meter radio telescope by 2028, as construction kicked off near Qitai county, some 200 kilometers to region’s capital Urumqi on September 21.

Wang Na, the head of the Xinjiang Astronomical Observatory (XAO) under the Chinese Academy of Sciences, revealed during an exclusive interview with the Global Times on Sunday that the 110-meter steerable radio telescope codenamed QTT – shorthand for QiTai radio Telescope – has a wide range of working frequency from 150 MHz to 115 GHz, meaning it is capable of observing radio waves from meter-level to millimeter with a high precision, and can also observe three fourths of the whole sky.

It will be mainly observing objects such as the pulsar with its low frequency band in order to serve scientific goals, including research on gravitational wave, and its high frequency band will focus on the study on the forming and evolution of stars and on the origin of life in space, Wang said.

Specifically, mainly at the mid-frequency band will make contribution to the sensitivity of the international Very Long Baseline Interferometry (VLBI) network to study the nature of black holes as well as the structure of galaxy, she explained.

The construction of the mega telescope facing with the challenges including the harsh winter environment on the 1,800 meters above sea level will take around six years and it will be the world’s largest yet most accurate steerable radio telescope by completion, Wang noted.

When asked why the XAO selected the Qitai county to be the site of such large astronomical project, Wang revealed that in fact, the designer team has considered as many as 48 sites along the Tianshan mountain, and the Qitai site was the best one.

The site has to be far enough from a densely populated city and be located in a mountain region in order to resist radio interference. The site is around 200 kilometers away from Urumqi and some 45 kilometers from Qitai county, which meets such requirement, Wang said.

The Qitai site has a basin structure, which offers a terrain condition to fend off radio interference from outside. The site is also a natural wind shelter so that it can resist the wind impact of the surface to ensure the stability of the telescope structure, which is a key to the precision, Wang said.

The road transportation of the Qitai site is also very convenient, she explained.

Chinese and US astronomers have recently filmed for the first time the magnetic field changes in the surrounding environment just one astronomical unit away from the center of the fast radio burst (FRB) located outside the Milky Way using the Five-hundred-meter Aperture Spherical Radio Telescope (FAST).

The observation is an important step toward revealing the engine mechanism of the FRB center, the Xinhua News Agency reported on Thursday.

The QTT will allow international researchers to use for a certain period by completion, and the method will be similar to the FAST mechanism, the XAO head said, adding that it will join force with the FAST in scientific research, as its full steerable dish will “see” larger sky areas that the FAST cannot, consolidating the country’s advantage in the domain of radio telescope.

FAST, also known as the “China Sky Eye,” is located in a naturally deep and round karst depression in Southwest China’s Guizhou Province. FAST started formal operation in January 2020 and officially opened to the world on March 31, 2021. It is believed to be the world’s most sensitive radio telescope.

Industry observers hailed that the Xinjiang telescope is a cutting-edge project that could compare to the FAST.

According to Wang, it is designed to have 50 people stationed on site including those supporting personnel, and at first it will host some 30 people for early stage testing work. The number of the stationed personnel will become less and less, and an eventual autonomous running with remote operation is also possible.

Also marking another technology breakthrough, the QTT will adopt a quasi real-time monitoring and adjustment technology for the telescope surface, resisting impacts from not only the gravity but also from environment factors such as the sun lights, which is unprecedented in the country’s history, Wang revealed.

According to the Xinjiang regional media, the QTT will also be used to support China’s future deep-space exploration projects such as lunar, Mars and asteroid probes as well as projects to explore the edge of the solar system.