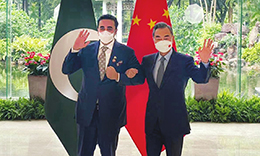 Chinese State Councilor and Foreign Minister Wang Yi and visiting Pakistani Foreign Minister Bilawal Bhutto Zardari on Sunday reached consensus on enhancing counter-terrorism cooperation, including formulating “enhanced plan” to safeguard the security of Chinese personnel and projects in Pakistan and further exploring the potential of the China-Pakistan Economic Corridor (CPEC), during their meeting in Guangzhou, South China’s Guangdong Province.
Chinese observers noted the time-tested China-Pakistan relations have shown resilience to major changes in regional and international realities, and attempts to sow discord, such as the recent terrorist attack, are doomed to fail.
Solidarity between the two countries will add certainty to an uncertain world, experts said, noting China and Pakistan will join hands to push for global peace and development and reinforce the open and inclusive regional cooperation structure in Asia.
This is Bilawal’s first official overseas visit since taking the post of foreign minister in April and the first face-to-face high-level interaction between China and the new Pakistani government.
As Bilawal’s visit coincides with the 71st anniversary of the establishment of diplomatic ties between the countries, which fell on Saturday, May 21, he cut a cake together with Wang to celebrate the event, the Global Times learnt from the Pakistani Embassy.
The two side agreed on Sunday that Pakistan and China will continue to firmly support each other’s core interests and concerns and deepen strategic communication and practical cooperation.
In talks with Wang, Bilawal also condemned the terror attack against Chinese nationals at the Confucius Institute at the University of Karachi, saying that the perpetrators involved in this heinous crime will be taken to justice, and vowed to escalate security protection schemes to ensure safety of Chinese people, institutes and programs in Pakistan.
Bilawal and Wang agreed that any terrorist attack against Chinese citizens in Pakistan is unacceptable, and any despicable attempt to undermine the China-Pakistan friendship will not succeed.
The two agreed to come up with an “enhanced version” of security mechanism to safeguard the security of Chinese personnel, institutions and projects in Pakistan.
Qian Feng, director of the research department at the National Strategy Institute at Tsinghua University, told the Global Times that the two countries have many mechanisms to communicate on the topic and could enhance cooperation in identifying risk points, deployment of security staff, information and intelligence sharing and even counter-terrorism law enforcement as part of the “enhanced plan” of protecting Chinese people and projects in Pakistan.
Wang and Bilawal also agreed to further explore China-Pakistan Economic Corridor (CPEC) cooperation potential and deepen cooperation in the fields of energy, industries, agriculture and information technology, so as to hasten Pakistan’s industrialization and boost the momentum and resilience of Pakistan’s economic development.
Experts said now that the CPEC has entered the second stage of high-quality development, if further potential could be ushered in, the project can play a bigger role in helping Pakistan tide over its economic difficulties.
The two countries also decided to resume direct flights carried out by Pakistan International Airlines at the earliest time possible and subsequently increase directs flights based on the pandemic situation, according to a joint statement released after the meeting.
No matter how the regional and international environments change, ties between China and Pakistan will prosper and add certainty and stability to the regional and world, observers said.
In the joint press conference after their meeting, Wang also slammed the US-led Indo-Pacific Strategy which attempts to erase the existence of the “Asia-Pacific” and negate effective regional cooperation architecture and the fruits and momentum of peaceful development created by all countries in the region over the past decades.
“The essence of the strategy is to create division, incite confrontation and undermine peace. No matter how it is packaged or disguised, it will be doomed to failure,” Wang said.
Asia-Pacific countries generally prefer not to take sides as the prevailing voice is to pursue harmony and win-win cooperation, and current trend is to prompt regional integration and build an Asia-Pacific community with a shared future, Wang said.
Facing turbulent international affairs, China-Pakistan solidarity is of great importance to safeguard the security and stability of the region, Lin Minwang, a professor at the Institute of International Studies of Fudan University, told the Global Times on Sunday.
Bilawal agreed with Wang that the two countries will strengthen an open and inclusive regional cooperation framework, resolve hotspot issues through dialogue and consultation and called for mutual respect rather than a Cold War mentality and camp confrontation.