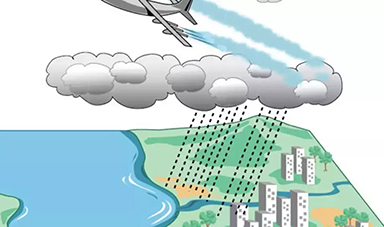 At least 10 provincial-level regions in Central and South China have resorted to precipitation enhancement to induce rain in the battle against the ongoing strongest heat wave in six decades, and Chinese meteorological departments and observers affirmed the effect of the process in alleviating drought and lowering temperatures, while stressing that the technique will not affect global rainfall, aggravate climate change or damage the ecosystem, as some Western media claimed.

After cloud-seeding with artificial rain-enhancing planes on Thursday, Southwest China’s Sichuan Province and Chongqing Municipality are expected to get moderate to heavy rain from Saturday to Tuesday, and the National Meteorological Center on Friday forecast that in the next 10 days, West China will receive many rounds of rain, as will East China’s Anhui and Jiangsu provinces and Central China’s Hubei Province, all of which have used cloud-seeding recently to induce rain.

Also on Thursday, Sichuan’s meteorological department deployed two artificial rain-enhancing drones to induce rain, and according to China Central Television, the operation covered an area of about 600 square kilometers, bringing significant rain and effectively alleviating the drought brought by days of heat waves in the Sichuan Basin.

From August 1 to Thursday, China deployed 91 cloud-seeding flights, with a cumulative flight time of 260 hours, and launched 116,000 rain bombs and 25,000 rain enhancement rockets, and ignited 2,000 flares by devices on the ground, chief scientist Zhou Yuquan of the China Meteorological Administration (CMA) said on Friday, according to news.weather.com.cn, a public weather platform affiliated with the CMA.

According to the CMA, drones could carry out rain enhancement operations in complex land conditions, and they serve as an important measure to combat drought, ensuring the security of food, water resources and the ecology. Meteorological departments will closely monitor meteorological conditions, and seize the opportunity to carry out more cloud-seeding operations, the administration said.

The rare strong heat waves resulted in several forest mountain fires in Chongqing this week, which were finally extinguished on Friday morning, although they forced some companies in neighboring Sichuan to either cut power or temporarily shut down.

Wei Ke, associate research fellow at the Institute of Atmospheric Physics of the Chinese Academy of Sciences, told the Global Times on Friday that releasing cloud-seeding chemicals from planes, rockets, anti-aircraft guns and ground-based generators are the four major types of China’s artificial rain enhancement measures.

The cloud-seeding chemicals, mainly silver iodide particles, will be dissolved in the heat and are “seeded” in the clouds, according to Wei.

Cloud-seeding involves silver iodide, and it has been commonly used globally for decades. Last year, eight US states turned to cloud-seeding to induce rain amid the stress of drought and heat waves, Guardian reported.

This year, facing the strongest heat wave since 1961, China’s cloud-seeding efforts have been widely reported by Western media, but some attempted to throw mud at the technique, claiming that “China is controlling the weather through cloud seeding,” and it may affect the “world’s overall rainfall and exacerbate global climate change.”

An article published by Newsweek on Wednesday also claimed that the “toxic silver ions from the silver iodide may be harmful to human and animal life.”

However, Wei denied their accusations, saying that “talking about toxicity without mentioning dosage is like playing bully-boy tactics.”

He said that after being dispersed to a very large area, the dose of silver iodide particles per unit area is extremely small. “Thus, its influence on the environment could be negligible,” Wei said.

Meanwhile, cloud-seeding has to meet strict air conditions, and it could increase rainfall by 20 percent at most. Thus, it could not have any influence on the overall rainfall in a region or affect the global climate, Wei said.