Democrats pick up US Senate seat with Fetterman’s Penn. win 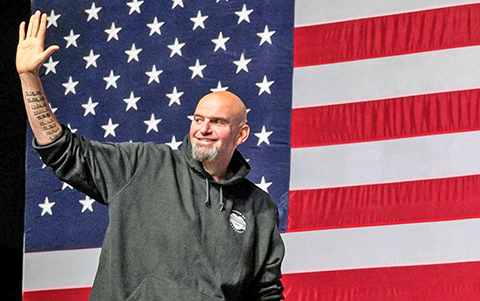 Pittsburgh, Nov 9 (AFP/APP): President Joe Biden’s Democrats picked up a key US Senate seat in swing state Pennsylvania, boosting their chances of retaining their razor-thin majority in the upper chamber of Congress.
Media projections early Wednesday showed John Fetterman, the state’s lieutenant governor, defeated celebrity doctor Mehmet Oz, a Republican who had the endorsement of former president Donald Trump.
It has been one of the most heated and closely contested races of the US midterm elections.
Fetterman, who is recovering from a stroke he suffered during the campaign, will take over the post vacated by retiring Republican Senator Pat Toomey — making good on Democrats’ hope to flip the seat and better their chances to retain Senate control.
“We held the line… We did what we needed to do,” the 53-year-old Fetterman, dressed in his trademark hoodie, told a cheering crowd in Pittsburgh.
“This race is for the future of every community all across Pennsylvania,” he said. “For every small town or person that ever felt left behind, for every job that’s ever been lost, for every factory that was ever closed.”
US networks called the race in Fetterman’s favor in the early hours of Wednesday. With 91 percent of votes in and counted, Fetterman was ahead 49.9 percent to 47.7 percent, a difference of about 106,000 votes out of five million cast.
The win marked a dramatic end to a rollercoaster Senate race seen as perhaps the most important in the nation.
Both parties spent millions of dollars in a bid to win the critical seat, and the campaign was laced with animosity as the Oz team questioned Fetterman’s fitness for office and the Democrats savaged Oz over his career missteps and lack of political experience or Pennsylvania roots.
The victory secures at least 48 Senate seats for Democrats, with 47 confirmed for Republicans. Five races remained too close to call.