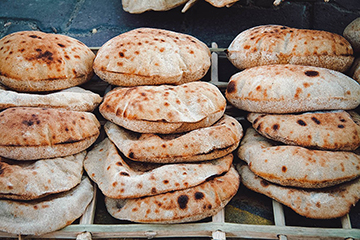 In a cynical attempt to calm the Egyptian population about recent price hikes, President Abdel Fattah Al-Sisi has suggested that Egyptians eat leaves from trees just as the Prophet (peace be upon him) did.
“Sisi says that he is not worried that someone will say that a kilo of okra costs 100 Egyptian pounds because Egyptians are aware that “the Companions of the Prophet [pbuh] were trapped with the Messenger in the outskirts of Makkah for 3 years until they ate leaves. They did not ask the Messenger for food or for the earth to explode from beneath them [with riches].”
The tweet refers to the siege against the Muslim by Quraish, it ended with the Prophet’s first wife Khadijah dying and them losing all their wealth. That year is known as the Year of Sorrow and was the worst in the Prophet (pbuh)’s life.
Al-Sisi went on to say that during this time Muslims didn’t complain, suggesting that Egyptians should be patient and not demand immediate solutions.
In March Egypt turned to the IMF for the third time in six years to apply for a loan as the country grapples with corruption, the global coronavirus pandemic and now the Russian war on Ukraine.
Analysts have predicted that a further rise in fuel and food prices are likely to stoke civil unrest in Egypt where a third of the population live below the poverty line.
Al-Sisi has made a string of outrageous comments over the years which his critics say is to deflect responsibility for his mishandling of the economy and spending money on vanity projects like the new capital instead of building a welfare state.
In 2017 Al-Sisi was mocked online for asking citizens to donate their spare change to charitable projects.
He has also asked Egyptians to lose weight to save money after the price of fruit and vegetables skyrocketed after the government’s economic reforms slashed food subsidies.
A member of the Egyptian security services Mohamed Mansour said it was “rude” to complain about rising prices and food shortages and asked Egyptians to “sacrifice their dinner” for the sake of the country.
In 2019 the president asked Egyptians to work 12 hour days to increase economic output.