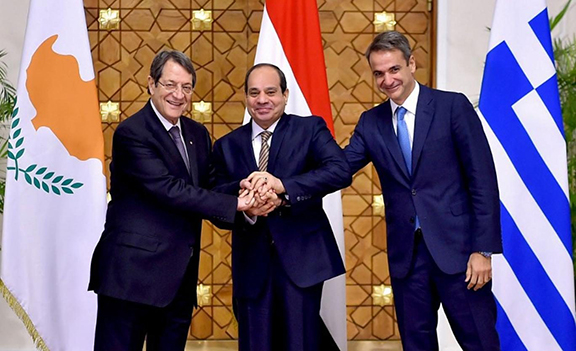 This came during Egypt’s hosting of the fifth meeting of the defense ministers, as well as leaders of the armed forces, of the three countries.

Egyptian military spokesman Col. Arkan Harb Gharib Abdel Hafez said in a statement that the meeting dealt with a number of topics and issues related to defense cooperation.

Lt. Gen. Mohamed Zaki, commander-in-chief of Egypt’s armed forces, and minister of defense and military production, held a bilateral meeting with the Cypriot Defense Minister Charalambos Petrides to discuss the transfer and exchange of information and skills between the armed forces of both countries.

Zaki also held talks with Nikolaos Panagiotopoulos, Greek minister of defense, to review the regional and international defense situation and its implications for security and stability in the Middle East and the Eastern Mediterranean.

In his opening address, Zaki highlighted “the importance of supporting means of cooperation and partnership between Egypt, Cyprus and Greece, which contributes to achieving security and stability in the Middle East and the Eastern Mediterranean region, praising the fruitful cooperation the Egyptian-Cypriot-Greek relations are witnessing during recent times.”

The Cypriot defense minister supported extended partnership and cooperation, especially with joint exercises and the exchange of experiences between the armed forces.

The Greek defense minister expressed his appreciation for Egypt’s influential and active role to achieve security and stability in the Middle East and Eastern Mediterranean.

At the conclusion of the discussions, a joint statement was signed within the framework of the efforts of the Egyptian, Cypriot and Greek armed forces to support cooperation in defense and security in order to confront challenges and threats, and support peace and stability in the eastern Mediterranean.