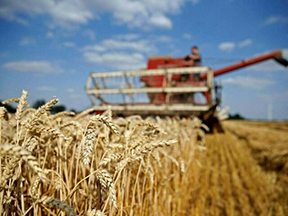 On Saturday India announced it was banning wheat exports as a heatwave hit crops and the Russian invasion of Ukraine continues.
Egypt, along with other countries that need wheat for their food security needs, were exempt from the ban.
India’s export ban could push prices even higher and has been condemned by G7 industrialised nations who fear it will worsen the crisis.
The Russian invasion of Ukraine has led to a rise in food prices, as Ukraine is the world’s biggest exporter of sunflower oil and a major producer of maize and wheat.
Eighty per cent of Egypt’s wheat imports are from Russia and Ukraine, which has compounded soaring prices in a country which has already lived for a year through austerity measures.
In March, the Egyptian pound fell 17 per cent in value against the US dollar after the Central Bank.
That same month, the government turned to the IMF for the third time in six years to apply for a loan.
The Civil Unrest Index Projections recently said that rising food prices are set to stoke civil unrest in developing middle income countries, with Egypt among the countries set to be most at risk.
On 9 May, the Egyptian government released three young Egyptian social media influencers who were imprisoned for “spreading false news” after they broadcast a video mocking the recent price rises.
At the time their video was published, Egypt’s CAMPAS said that the country’s annual consumer price inflation was 12.1 per cent compared to 2.4 per cent in March last year, whilst the cost of vegetables, oils and grains rose by 23 per cent.