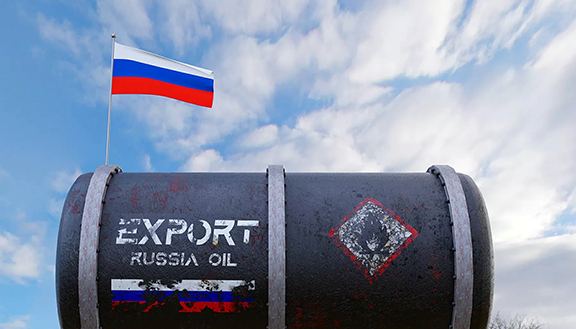 With western sanctions looming and many nations shunning it, Russia appears to have discovered a new gateway for its crude, with Bloomberg reporting that Moscow has for the first time ever used Egypt’s El Hamra oil terminal on its Mediterranean coast.
The first shipment took place on July 24, with 700,000 barrels of oil offloaded before another vessel collected a consignment from the port just a few hours later. According to vessel-tracking data by Bloomberg, there are speculations that the consignments may have included some or all of Russian crude and/or oil products.
Experts say the highly unusual move makes the cargo’s ultimate destination much harder to track, adding to a trend whereby Russian oil shipments are becoming increasingly obscured since European and western buyers began to shun them following the nation’s invasion of Ukraine.
El Hamra has six storage tanks with a 1.5-million-barrel capacity, along with a single-buoy mooring facility for loading and unloading. The oil terminal was built to handle crude produced in Egypt’s western desert, which makes it possible to blend the Russian barrels with local oil
Whereas Egypt is already being used by Russia as a transit route for fuel oil, it remains unclear if El Hamra was a one-off, or will feature more prominently in Russian oil flows. Previously, tankers carrying Russian crude have conducted ship-to-ship cargo transfers mid-Atlantic or off the Spanish north African city of Ceuta. That’s also another unusual location for such a tricky maneuver that’s normally executed in sheltered, calmer near-shore locations.
Bloomberg has also reported that another crude cargo transfer appears to have been conducted in Johor, near Singapore, in June. Johor is a newly emerging hotspot for trans-shipping cargoes of Iranian crude bound for China. Russia has been scrambling to identify and test different routes and ways to deliver its energy products to buyers–with China and India being key among them.