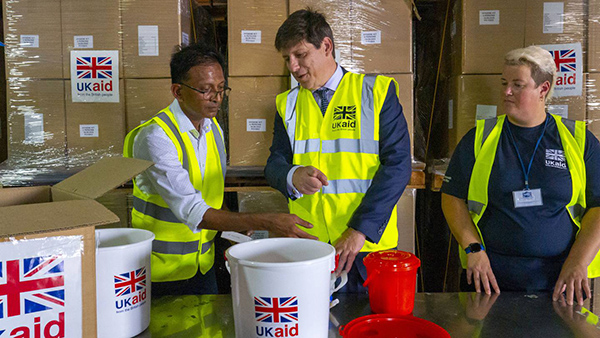 The aid items by the British government as part of a £41.5 million pledge to support millions of people displaced by floods in Pakistan.

Emergency shelters are intended for up to 187,050 people while water filters and hygiene supplies should be enough for up to 31,282 people.

Pallets loaded up into shipping containers will arrive in Karachi within five days and life-saving supplies will be delivered to the worst affected areas.

Catastrophic flooding in Pakistan has left more than 250,000 square kilometers of land submerged, displacing 33 million people and destroying huge stretches of farmland.
More than 1,600 people have been killed and about 2 million homes have been destroyed.

“Dubai is an efficient global hub that allows us to act speedily during times of crisis,” Patrick Moody, British ambassador to the UAE was quoted as saying by Emirates newspaper The National.

“We have given £16.5 million directly from the government, £25m from the British people themselves — they consistently do this to top up what the government is already doing when disasters happen.”

“The UAE’s We Stand Together initiative is working well and shows the importance of strong partnerships.

“The British government is committed to this kind of action, and humanitarian work will continue to be one of our bedrocks, although we would like to solve the problems that cause these disasters in the first place.”

A financial appeal by the United Nations and Pakistan for help has been answered by the UK and UAE governments, which are working in partnership to deliver aid where it is most needed.

Around £10m of the money raised by the UK’s Disasters Emergency Committee will go to international aid agencies on the ground to provide water, sanitation, and shelter.

Funds will also support families to repair their homes and maintain their livelihoods.

An initial £1.5m pledged by the UK has already been used to assist at least 15,000 families, offer primary health care support through mobile medical camps, and provide some 4,000 hygiene kits.

“The kits being sent to Pakistan are tailored to what people need. It is a highly efficient operation.”