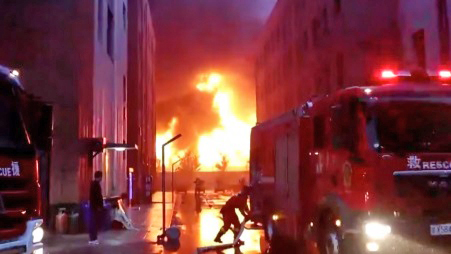 Lyon, Dec 16 (AFP/APP): Five children including a three-year-old were among 10 people killed when a fire broke out in a seven-story apartment building in a suburb of the French city of Lyon, the government said Friday.
Fourteen people were injured, including four who required emergency treatment, after the fire erupted in Vaulx-en-Velin on the northern outskirts of Lyon, in eastern France, the local authorities said.
Interior Minister Gerald Darmanin told reporters in Paris before heading to the scene that 10 people were killed, including five children aged between three and 15.
“We do not know the cause of the fire and the investigation will be able to find out,” he said.
“It’s shocking and the toll is extremely heavy,” he said, adding he had already discussed what had happened with President Emmanuel Macron.
The fire has been put out, local authorities said, adding that the blaze erupted shortly after 3:00 am (0200 GMT) in Vaulx-en-Velin.
Two firefighters suffered light injuries while battling the blaze, which broke out on the ground floor of the building, they said.

Smoke as well as flames then surged upwards, putting all the residents of the building in danger.
Nearly 170 firefighters had been deployed at the building.
“It was horrific,” said Mohamed, whose last name was not given, the cousin of a resident who managed to escape from the fourth floor to safety with his two children.
A large security cordon was set up in the area, a district that had been undergoing a process of substantial urban renewal.
The emergency services were busy on the scene with ambulances, trucks, and flashing lights, according to an AFP photographer.
In the middle of the night and on one of the coldest nights of the winter, the rescue operation took place in “difficult conditions”, said Darmanin.
The area had often been the scene of social tensions in the Lyon suburbs, sometimes gritty areas in total contrast to the glitzy city centre which is a magnet for international gastro-tourism.
But the local authorities in the early 2000s launched a program worth 100 million euros to revamp it into a so-called “eco-district” to develop local shops and expand public transport.