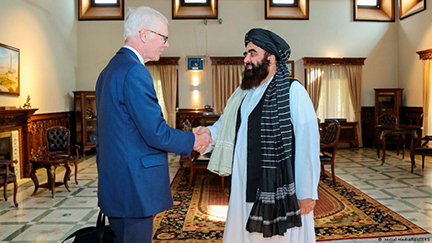 The Taliban have released several British citizens who were detained in Afghanistan after an agreement was reached between the two countries, Taliban and UK officials have said.
The detainees were released on Sunday following a series of meetings between Afghan and British officials, said Zabihullah Mujahid, spokesman for the Taliban government, in a statement on Monday.
“A number of British nationals were released, who were arrested about six months ago for violating the laws and traditions of the Afghan people,” he said.
Mujahid didn’t say what laws the UK citizens had broken or elaborate on why they had been detained.
The statement said all of them pledged to respect the laws of Afghanistan, the traditions and culture of the Afghan people and not to violate them again.
London said five Britons had been released, but did not provide their identities or details on when they were arrested and on what grounds.
“Pleased the UK has secured the release of 5 British nationals detained in Afghanistan,” Foreign Secretary Liz Truss wrote on Twitter.
The Foreign Commonwealth and Development Office (FCDO) said in a separate statement that the five “had no role in the UK government’s work in Afghanistan and travelled to Afghanistan against the UK Government’s travel advice. This was a mistake.”
The friends and family of Peter Jouvenal, a journalist and businessman with a long association with Afghanistan, said he was among those released.
On February 12, the government in London said a “number” of British nationals were being detained and that it had raised the issue with the Taliban.
Among them was Jouvenal, who was stopped last December.