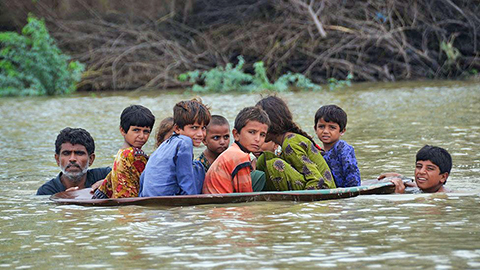 WASHINGTON”, Oct 22 (APP): Pakistan needs “massive” support from the international community for the rehabilitation of millions of people displaced by the devastating floods and reconstruction of the damaged infrastructure, Ambassador Masood Khan has said.

In an interview with a leading American TV network, he said that debt restructuring would provide Pakistan with the much-needed fiscal space enabling it to allocate its resources for building climate-resilient infrastructure for its people.

The Pakistani envoy was speaking at anchor Dennis Wholey’s programme ‘This is America and The World” on the Public Broadcasting Service (PBS).

Ambassador Masood Khan, who was discussing immediate and long-term needs of Pakistan, urged the international community to find collective solutions to dealing with the challenges of climate change and its dire consequences for the planet.

The floods in Pakistan and the hurricane in Florida have “proved that even if you are a developed country like the United States you have the same challenges when it comes to climate change although you have better, resilient infrastructure.”

On Pak-US relations, Masood Khan said that the two countries were pursuing a positive agenda.

Pak-US relations, he said, should not be confined to strategic objectives alone. “We must strengthen our cooperation in the economic, trade, investment, energy and climate sector.”

Encouraging US investors to reap the benefits offered by Pakistan’s economy, especially in the tech sector, Masood Khan said that “there will be exponential growth (in the sector) because of increase in human capital, tech savvy young population.”

About the use of nuclear weapons, the ambassador said that nuclear capability was acquired and designed basically for deterrence and equilibrium, but their actual use could trigger a global catastrophe. As such, he said all countries, particularly the ones having nuclear weapons, should demonstrate restraint and responsibility.