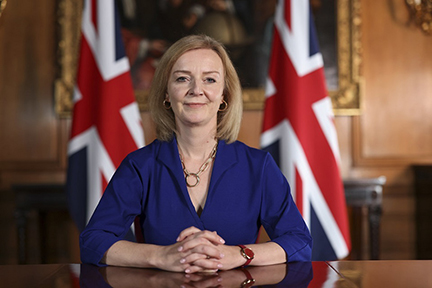 London, July 11 (AFP/APP): UK foreign minister Liz Truss on Sunday joined the race to succeed Boris Johnson as prime minister and leader of the ruling Conservative party, as the fractious contest focused on tax.
Truss, 46, announced her candidacy in the Daily Telegraph newspaper on Sunday evening, saying she had “a clear vision of where we need to be, and the experience and resolve to get us there”.
The bid by Truss, seen as a frontrunner in the Tory leadership contest, followed that of former defence minister Penny Mordaunt as the race expanded to 11 candidates.
Mordaunt, 49, an ex-navy reservist who has also held several senior ministerial roles, is not among the favorites to succeed Johnson in recent polls of Tory party members ultimately set to choose their new leader.
But such contests are notoriously unpredictable, and with more than a dozen lawmakers from multiple factions of the ruling party potentially set to run, political commentators say few contenders can be discounted.