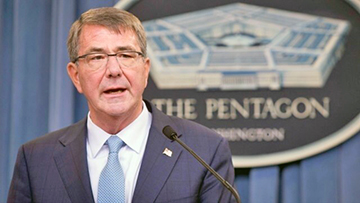 Ashton Carter, who served as secretary of defense under former US President Barack Obama, has passed away aged 68. Carter oversaw the arming of Ukraine and the US intervention in Syria, and welcomed transgender troops to the US military.

Carter’s family announced his death on Tuesday, saying that the former Pentagon chief had suffered a heart attack the night before. He leaves behind a wife and two children.

Carter served as Obama’s second secretary of defense, taking over from Chuck Hagel in 2015 and holding the post until James Mattis was appointed by Donald Trump in 2017.

With a US-backed coup having ousted Ukraine’s democratically elected president Viktor Yanukovich a year earlier, Carter promised from the outset of his tenure to increase US military aid to Yanukovich’s pro-Western replacement, Pyotr Poroshenko. With the US sending more than a billion dollars to Kiev during his time in charge, Carter said in 2019 that this aid “was critical” in rebuilding Ukraine’s armed forces.

Back in the US, Carter was praised by liberals and condemned by conservatives for his 2016 decision to allow transgender people to join and openly serve in the military. The move remains a controversial one to this day. Mattis reinstated the transgender ban in 2018, while current Defense Secretary Lloyd Austin once again overturned it in 2021.

Educated as a physicist, Carter had served in the US government since the 1990s. After managing the Clinton administration’s policy toward the former Soviet Union, he worked on procurement for the Pentagon during Obama’s first term, and was promoted to deputy secretary of defense in 2011.

While the Obama administration signed a nuclear deal with Iran in 2015, Carter had earlier been a proponent of “preventative” military strikes on the Islamic Republic. He also supported the 2003 invasion of Iraq and spoke in favor of bombing North Korea in 2006.