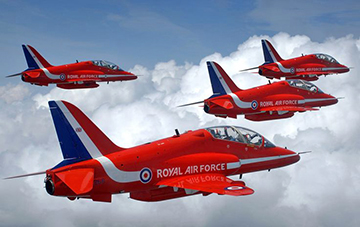 Some former UK pilots are reportedly being offered up to $270,000 to teach the Chinese military the ways Western pilots and planes operate.
The UK government was made aware of a few former military pilots being recruited to assist Chinese forces as early as 2019, but had dealt with the issue “on a case by case basis.” However, now that the pandemic travel restrictions are being lessened, it appears the occurrences have increased, leading the UK to issue an intelligence alert warning pilots against working for the Chinese military.
“They are a very attractive body of people to then pass on that knowledge,” a Western official said in a statement. “It’s taking Western pilots of great experience to help develop Chinese military air force tactics and capabilities.”
According to a spokesperson for the UK Ministry of Defense, the UK is “taking decisive steps to stop Chinese recruitment schemes attempting to headhunt serving and former UK armed forces pilots to train People’s Liberation Army personnel in the People’s Republic of China.”
“We’ve seen it ramp up significantly,” an official informed journalists at a briefing. “It is an ongoing issue.”
Pilots are said to be recruited by third-party liaisons with ties to a “particular” South African flying academy, officials have detailed.
The pilots, who have experience on a vast array of different aircraft with the exception of F-35s, are being recruited from all over the UK military and are not limited to just the Royal Air Force. So far, there is no evidence suggesting that any former RAF pilot has broken the Official Secrets Act, which provides for the protection of state secrets and official information related to national security.
A warning issued by the UK government has urged British pilots against disclosing sensitive information to the Chinese military and asks anyone approached to report the encounter to the Ministry of Defense so that the situation can be monitored.