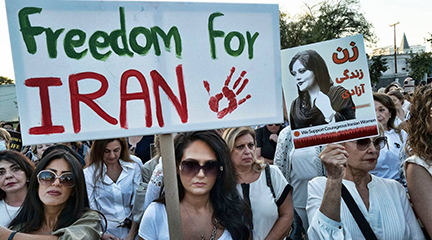 Paris, Oct 8 (AFP/APP): The French government on Friday advised its nationals visiting Iran to “leave the country as soon as possible”, citing the risk of arbitrary detention.
“All French visitors, including dual nationals, are exposed to a high risk of arrest, arbitrary detention and unfair trial,” the foreign ministry said on its website, adding “this risk also concerns people making a simple tourist visit”.
The foreign ministry went on to warn that “in the event of arrest or detention, respect for fundamental rights and the safety of individuals are not guaranteed” in Iran.
The move came the day after Iranian state television broadcast what it said were “confessions” by two French nationals, five months after they were arrested in the Islamic republic.
French teachers’ union official Cecile Kohler and her partner Jacques Paris have been detained in Iran since May 7 and stand accused of seeking to stir labour unrest during teachers’ strikes earlier this year.
Iran had announced on May 11 the arrest of two Europeans “who entered the country with the aim of triggering chaos and destabilising society”.