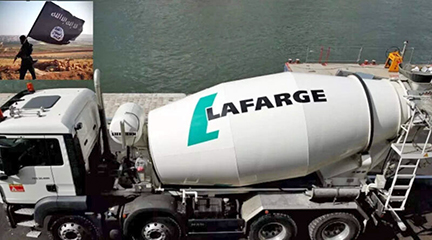 According to Reuters, the company which was bought by Switzerland’s Holcim Group in 2015, made the admission yesterday in a New York federal court, making it the first time a company had pleaded guilty in the US to aiding terrorists.

Prosecutors had accused Lafarge and it Syrian subsidiary of Lafarge Cement Syria of paying Daesh and Al-Nusra Front (since rebranded as Hayat Tahrir Al-Sham) via intermediaries the equivalent of approximately $5.92 million between 2013 and 2014 in order to continue running its factory and using their checkpoints.

This enabled the company to earn $70 million in revenues from its plant operating in Jalabiya near the Turkish border, the prosecution said.

Lafarge eventually evacuated the plant in September 2014 after Daesh took control of the town and the factory and sold it for the equivalent of $3.21 million.

“Lafarge made a deal with the devil,” Breon Peace, the top federal prosecutor in Brooklyn, told reporters following the guilty plea. “This conduct by a Western corporation was appalling and has no precedent or justification.”

In a statement, Lafarge said it had “accepted responsibility for the actions of the individual executives involved, whose behavior was in flagrant violation of Lafarge’s Code of Conduct. We deeply regret that this conduct occurred and have worked with the U.S. Department of Justice to resolve this matter.”

Following the US court ruling, a French lawmaker has criticised the inaction of the French authorities. “The US has penalised Lafarge for financing Daesh. What about France?” Clementine Autain asked on Twitter, adding that she had appealed to the government on the issue “so many times” but her efforts were “in vain”. Autain added that “Silence and inaction are culpable.”