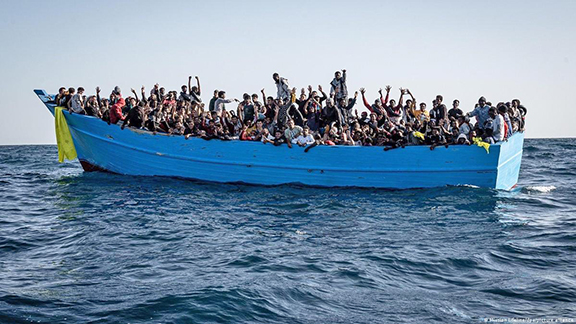 Paris, Nov 9 (AFP/APP): France denounced as “unacceptable” Italy’s refusal to take in a migrant ship, as the two countries wrangled over which should accept a vessel with 234 people aboard.
The row centers on the Ocean Viking, a charity ship that has sailed away from Sicilian waters toward France after unsuccessfully waiting for permission to dock in Italy since late October.
Run by European charity SOS Mediterranee under a Norwegian flag, the ship appealed to France to accept it, and it was expected to approach Corsica by Thursday.
A diplomatic row over its fate was building on Tuesday after Italy’s new right-wing Prime Minister Giorgia Meloni thanked France for opening a port to the Ocean Viking — in anticipation of any confirmation, or denial, by France.
On Wednesday, French government spokesman Olivier Veran branded Italy’s refusal to allow the ship to dock as “unacceptable.”
“The ship is currently in Italian territorial waters, there are extremely clear European rules that were accepted by the Italians,” Veran said, adding that “the current attitude of the Italian government, notably its declarations and refusal to accept the ship” were “unacceptable.”
Italy’s new far-right government, led by Meloni’s Brothers of Italy party, has vowed to stop the tens of thousands of migrants who arrive at the country’s shores each year.