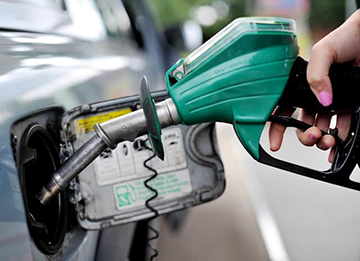 Paris, Oct 7 (AFP/APP): Frustrated motorists faced another day of long waits at petrol pumps across France on Friday, with President Emmanuel Macron urging residents not to panic as a strike at energy giant TotalEnergies entered its 12th day.
TotalEnergies, among the world’s biggest oil companies, runs a network of around 3,500 filling stations in France, nearly a third of the total. Most of them are low on fuel.
Across France, nearly one in five filling stations were short of at least one type of fuel, according to government data.
“Does anyone know of a petrol station around here that’s been re-supplied?” read a post in a local Facebook group on Friday morning.
“Where can I get ethanol?” posted another motorist in the hope of filling the tank before the weekend.
Several of TotalEnergies’ oil refineries have been blockaded by striking workers.
“We’ve been dry since Sunday,” a manager at a station in central Paris said on Thursday.
Since the start of September, TotalEnergies has cut petrol prices by 20 euro cents ($0.19) per litre to help vehicle owners cope with sharp rises in energy prices triggered by the war in Ukraine.
The average price for E5-type unleaded petrol is now 1.62 euros per litre, or 6.19 euros per gallon, up around four percent from only a week ago.
“Everybody wants to buy from us because we’re cheaper,” the station manager said.
Bottlenecks due to strong demand have been exacerbated by strike action over pay, which has cut the frequency of fuel deliveries in half, he said.
Anthony, a plumber in Paris, said traffic was backed up along an entire boulevard as early as 7:00 am on Friday when he started his morning rounds, as people tried to reach a TotalEnergies station in the east of the capital.

“It’s been like this since 5 o’clock this morning and every morning before,” said Ali Mansoibou, the manager of an Agip petrol station in Marseille, pointing at a long queue of cars waiting to be filled.
Mansoibou said he allowed each driver to buy no more than 30 euros’ worth of fuel, but even so, “there’ll be nothing left for the weekend”.
The government has responded to the shortages by releasing fuel from strategic stocks, Energy Transition Minister Agnes Pannier-Runacher told the broadcaster BFM television late on Thursday.
In addition, more supplies were being brought in from neighbouring Belgium and elsewhere, she said.
Supply would improve “within two or three days”, she predicted.
Transport Minister Clement Beaune said fuel trucks would, exceptionally, be allowed to make deliveries on Sunday, in a bid to bring relief.
But Thierry Defresne, head of the European works council at TotalEnergies, told AFP that “every site” at the company had announced their intention to extend the strike action.
“Shareholders get a lot but workers are completely forgotten,” Defresne told RMC radio on Friday.
“Fabulous profits are being made but they don’t want to offset the impact of inflation (on employees),” he said.
TotalEnergies paid out a special dividend to shareholders totalling 2.6 billion euros ($2.55 billion) after the company — like most in the sector — made exceptionally large profits from high energy retail prices.
The government appeared sympathetic to the wage demands on Friday, with Olivia Gregoire, minister for small and midsize companies, calling on energy majors to “listen to demands for salary rises”.
Most of the sector’s companies had posted “strong results”, she said. “We expect an effort in favour of workers.”
President Emmanuel Macron issued an “appeal for calm” from French motorists, urging them, “Don’t panic.”
The northern Hauts de France region banned filling up jerrycans to discourage panic buying by drivers.
Macron struck a harder tone towards strikers.
“All wage demands are legitimate but you can’t block others from moving about and living their lives,” he said while on a trip to Prague earlier this week.
Staff at the French branch of oil major ExxonMobil have also demanded higher wages, with angry demonstrators setting fire to wooden crates during a protest in northern France on Wednesday.
TotalEnergies did not give any details about the impact of the strike on supply. A spokesperson told AFP simply that the situation was “stable”.