‘From Canada with love’: Canadians are paying to write messages on Ukrainian rockets 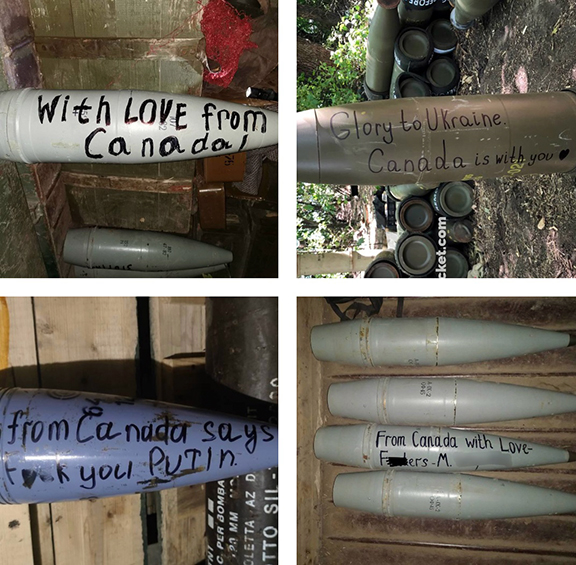 The rockets Ukrainian forces have been firing at the Russian army in recent weeks have carried taunting messages from Canadians.

They are part of a fundraising campaign that allows donors to brand Ukrainian rockets launched into Russian-held territory.

In exchange for a pledge, Ukrainian troops will pen a donor’s words on a shell and shoot it at Russian positions.

Afterwards, the sponsor gets a photo of the shell and video of it firing. The donations are used to buy equipment for the Armed Forces of Ukraine.

“Soldiers at the front lines will write your message in permanent marker on an artillery shell,” the fundraising website says. “Wish someone a happy birthday. Ask for a date … Send greetings to Putin.”

Depending on the type of munitions, minimum pledges range from $150 to $2,000. According to the website, the process takes two weeks.

“It felt like a small revenge,” said Nika, a Ukrainian-Canadian from Manitoba who participated. Global News is identifying her by her first name only due to security concerns.

She said her 86-year-old grandfather still lives in Ukraine and has to hide in a bomb shelter due to Russian attacks. “We feel helpless watching this horrific war unfold,” she said.

The message she put on the rocket read: “Glory to Ukraine. Canada is with you.”

Writing messages on weapons is a longstanding tradition, but as a fundraising tool in a conventional armed conflict, it may be unprecedented.

An expert on national security law, Prof. Leah West of Carleton University, said she did not see any legal problems for Canadians who take part in the campaign.

Ukrainians have launched scores of innovative fundraising drives to finance their defences against the invasion ordered by President Vladimir Putin six months ago.

Anton Sokolenko said he started Sign My Rocket on Telegram because so many supporters of Ukraine wanted to pay to write on ammunition.

A 21-year-old IT student and volunteer at a Ukrainian non-profit group that supports the armed forces, Sokolenko said two web designers later created the website.

“And the site is very important, so people around the world can express their hatred to Russians, make a donation to the Ukrainian army and get something in exchange,” he said in an interview.

Donors can also write messages on the turret of a T-72 tank or the barrel of a howitzer, as well as on a grenade dropped from a drone.

So far, the campaign has raised more than US$200,000. The money has been used to purchase vehicles, drones and other gear, Sokolenko said.

He shared photos showing a half-dozen rockets with messages he said Canadians paid to have written onto the shell casings.

All have been fired already, although he didn’t know exactly where.

“With love from Canada,” read one of them, paid for by Rob, an Alberta resident who Global News is identifying only by his first name for security reasons.

In an interview, he said many of his friends were Ukrainian-Canadians, and while he had donated to humanitarian groups, he also wanted to help the troops.

“I just wanted to do something,” he said. “It’s not a lot, but I’m willing to have my little part in it.”

He said he had also paid to put a message on an M777 howitzer shell: “F—k Putin – Ukraine will always be free!!”

The Canadian government sent several howitzers to Ukraine in April, provided training on their use and later sent replacement barrels.