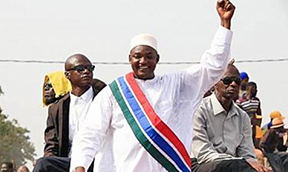 Banjul, Gambia, Dec 22 (AFP/APP): The Gambia’s government on Wednesday said it had thwarted a coup attempt the previous day and arrested four soldiers.
There was no immediate confirmation of the purported plot from other sources and the capital Banjul was calm.
“Based on intelligence reports that some soldiers of the Gambian army were plotting to overthrow the democratically elected government of President Adama Barrow, the (armed forces) in a swift military operation… yesterday arrested four soldiers linked to this alleged coup plot,” the government said in a statement.
“The apprehended soldiers are currently helping the military police with their investigations. Meanwhile, the army is in pursuit of three more alleged accomplices.”
Gambian police said in a separate statement that they had questioned Momodou Sabally, a former minister of presidential affairs under ex-leader Yahya Jammeh, after the release of a video suggesting the president would be overthrown before the next local elections.
Scattered witness accounts reported soldier movements around the presidential headquarters in the centre of the city on Tuesday evening, and rumours circulated during the night of a possible coup.
But people interviewed by AFP said they had seen no disturbance.
Sulayman Njie, 25, a youth advocate and entrepreneur, said he had been attending a national youth conference in Banjul until 4:00 am.
“We did not see anything unusual,” he said.
Momodou Lamin Bah, the lawmaker for Banjul North, said he had also been attending events at the conference, but witnessed nothing out of the ordinary.
“There is no security presence here because everything is normal,” he said.
The tiny West African state is a fragile democracy, still scarred by a brutal 22-year dictatorship under Jammeh.
Jammeh was defeated in presidential elections in December 2016 by political newcomer Barrow and fled to Equatorial Guinea, but retains clout back home.
Addressing supporters at a rally in The Gambia on Saturday via telephone, he said he would return soon and would lead the country once more.
Barrow was re-elected in December 2021 for a second five-year term with 53 percent of the vote.
He won a narrow victory in legislative elections in April but fell short of an absolute majority in the 58-seat parliament.
Gambia’s government urged citizens, residents and diplomatic personnel to “carry on with their normal activities as the situation is under total control and there is no need to panic.”
The Gambia’s international partners are exerting pressure on him to push ahead with reforms to strengthen the country’s democracy, including an overhaul of the security services.
The Gambia is the smallest country on the African continent, straddling the river that gives it its name.
It has a tiny Atlantic coastline but is otherwise surrounded by Senegal.
The densely populated nation was a British colony from 1888 until independence in 1965.
Its first president, former prime minister Dawda Jawara, was overthrown by Jammeh, then a young army officer, in a bloodless coup in 1994.
Jammeh ruled with an iron grip before his surprising election loss in December 2016.
He initially refused to accept defeat but fled into exile after neighbouring countries intervened.
In 2017, a Truth, Reconciliation and Reparation Commission (TRRC) was set up to investigate crimes committed under Jammeh.
It heard nearly 400 witnesses, both victims and former “Junglers”, or members of the regime’s death squads.
Its report, issued in November 2021, recorded a litany of death squads, arbitrary arrests, torture and disappearances, and drew up a list of officials it said should be prosecuted.
The Economic Community of West African States (ECOWAS) said on Wednesday it “strongly condemns” the coup attempt and “stands firmly by the democratically elected government” in The Gambia.
West Africa has been shaken by a series of military power seizures since 2020, in Mali, Guinea and most recently in Burkina Faso.
The turbulence, along with a wave of jihadism that has unfurled across the Sahel, spurred leaders of the regional bloc ECOWAS this month to decide on setting up an intervention force to reinforce stability.
But the scheme has run into doubts among military chiefs, who discussed it in Guinea-Bissau on Monday.
A report of their talks, seen by AFP, said there was the risk of overlap with the bloc’s existing doctrine on intervention, and questioned whether such missions could be feasible in countries where coups are supported by a large section of the public or the armed forces.
The bloc has had its ECOMIG force in The Gambia since January 2017, mainly to provide security for the president and members of government.
The bloc has recently renewed its mandate for a further year starting from January 1, but also recommended that its roll call, currently several hundred, be reduced.