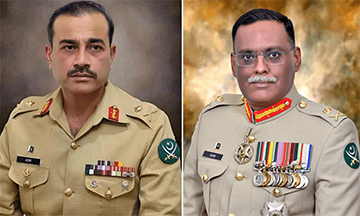 Gen Asim Munir will replace the outgoing General Qamar Javed Bajwa, retiring on November 29 after completing a second three-year term. Lt Gen Sahir Shamshad Mirza has been appointed as the chairman of the Joint Chiefs of Staff Committee (CJCSC). The CJCSC office is technically the senior-most in the armed forces, but the army chief office is the most powerful in the country.

Following the approval of their appointments, the new army chief and chairman of the joint chiefs of staff committee held separate meetings with the president and prime minister of Pakistan late Thursday evening, according to media reports.