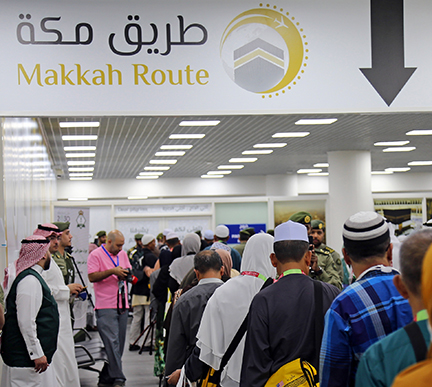 JEDDAH: King Abdulaziz International Airport in Jeddah received its first Moroccan pilgrims through the Makkah Route Initiative.
They departed from the Makkah Route hall at Mohammed V International Airport in Casablanca and were greeted by Moroccan Consul General Ibrahim Ajouli, Col. Suleiman Mohammed Al-Yusuf, and representatives from the initiative at KAIA.
The Makkah Route Initiative was launched for the first time this year in Morocco, adding to the four countries already participating in the project: Indonesia, Malaysia, Pakistan, and Bangladesh.
It aims to simplify procedures for pilgrims by issuing e-visas, completing passport procedures at the airport of the country of departure following the completion of health requirements, and dealing with luggage procedures, transport, and accommodation.
Upon arrival, pilgrims directly move to buses transporting them to their accommodation in Makkah and Madinah while authorities deliver their luggage to their lodgings.
Serving pilgrims is one of the Interior Ministry’s programs contributing toward Vision 2030.
The initiative was first launched in 2019 in a few airports and expanded this year, saving pilgrims up to 12 hours upon arrival at Saudi airports.