Half of the world’s glaciers expected to vanish by 2100: study 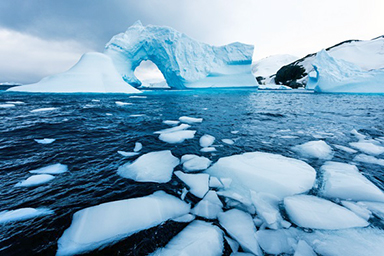 WASHINGTON: Half of the Earth’s glaciers, notably smaller ones, are destined to disappear by the end of the century because of climate change, but limiting global warming could save others, according to a new study.

The findings, published in the journal Science, provide the most comprehensive look so far at the future of the world’s 215,000 glaciers.

The authors emphasized the importance of restricting greenhouse gas emissions to limit the consequences of glacier melt such as sea level rise and depletion of water resources.

To help orient policymakers, the study looked at the impact of four scenarios on glaciers, where global mean temperature change is 1.5 degrees Celsius (2.7 degrees Fahrenheit), 2.0C, 3.0C and 4.0C.

“Every degree increase produces more melt and loss,” said Regine Hock of the University of Oslo and University of Alaska Fairbanks, a co-author of the study. “But that also means if you reduce the temperature increase, you can also reduce that mass loss. So in that sense, there is also a little bit of hope.”

Even if global temperature rise is limited to 1.5C above pre-industrial levels — the most ambitious goal of the Paris Agreement — the researchers estimated that 49 percent of the world’s glaciers would vanish by the year 2100.

That would represent about 26 percent of the world’s glacier mass because the smallest glaciers would be those first impacted.

Global mean temperature is currently estimated to be increasing by 2.7C which would result in a near-complete loss of glaciers in Central Europe, Western Canada and the continental United States and New Zealand.

“Regions with relatively little ice like the European Alps, the Caucasus, the Andes, or the western US, they lose almost all the ice by the end of the century almost no matter what the emission scenario is,” Hock said. “So those glaciers, they’re more or less doomed.”

Under the worst-case scenario — global temperature rise of 4.0C — giant glaciers such as those in Alaska would be more affected and 83 percent of glaciers would disappear by the end of the century.

Warming of 1.5C would lead to an increase in average sea levels of nine centimeters while temperatures 4.0C higher would cause 15 centimeters of sea level rise.

“It doesn’t sound very much, nine centimeters up to 15 centimeters,” Hock said, “but it’s not global sea level that is that much of a concern. It’s mostly associated storm surges, which have the potential to cause a lot more damage.”

The disappearance of glaciers will also have an impact on water resources because they provide freshwater for some two billion people.

“The glaciers compensate for the loss of water in summer when it’s not raining much and it’s hot,” Hock said.

The study’s projections, which are more pessimistic than those of UN climate experts, were reached through observations of the mass of each glacier through the decades and computer simulations.