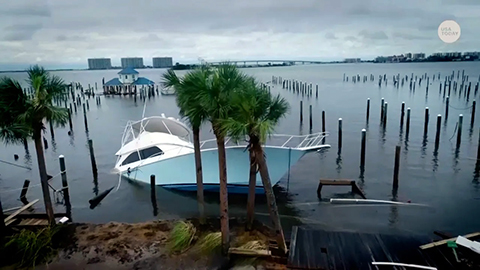 Mexico City, Oct 2 (AFP/APP): Powerful storm Orlene intensified to a Category 4 hurricane Sunday on its way to Mexico’s Pacific coast, where it is expected to make landfall on Monday night, the US National Hurricane Center (NHC) said.
“Extremely dangerous Category 4 Hurricane Orlene continues northward,” the NHC said in a Sunday morning advisory, warning of “significant wind, storm surge and rainfall” in the Islas Marias and southwest Mexico.
At the time of the advisory, the hurricane was 105 miles (170 kilometers) southwest of Cabo Corrientes in the western state of Jalisco.
The NHC forecast that the storm would pass over the Islas Marias Sunday night or Monday morning, and reach the mainland by Monday night.
It predicted it could gather further strength early Sunday, but would then gradually weaken until landfall.
Mexico’s National Water Commission (Conagua) also predicted that the storm would be a Category 1 or 2 hurricane by the time it moves onto land.
The storm will generate wind gusts of up to 70 miles (110 kilometers) per hour and waves of up to 16 feet (five meters) on the coasts of Nayarit and Jalisco states, Conagua added, urging the inhabitants of at-risk areas to take refuge in temporary shelters.
The Ministry of the Navy has closed the ports of Nayarit and Jalisco.
Authorities are keeping a close eye on the storm’s track as they mull whether to evacuate tourists from Mexican beach resorts to temporary shelters, Víctor Hugo Roldan, director of Civil Protection in Jalisco, told the press.
Tropical cyclones hit Mexico every year on both its Pacific and Atlantic coasts, usually between May and November.
In October 1997, Hurricane Paulina hit Mexico’s Pacific coast as a Category 4 storm, leaving more than 200 dead.